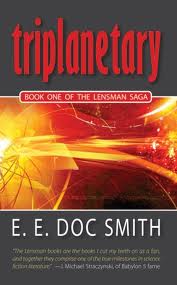 Cons: this entire 'book' is backstory, each section but the last reads like a short story

After hiding their existence from the evil alien Eddorian race, the Arisians try to mitigate the damage the Eddorians do to the burgeoning human race.

This review needs some explanation.  My husband has a fantastic collection of old SF classics.  For months he told me about a particular set of novels I should read: The Chronicles of the Lensman by E. E. "Doc" Smith.  I was game, though I had to fix my reading schedule to allow myself the time to start.  Now, my husband had told me the Lensman were not only classic stories, but stories that were the basis for a lot of other adventure style SF novels and stories, most notably the Green Lantern Corp (from the Green Lantern comics).

Ready for something different, I started the first novel (which, according to Wikipedia was serialized in magazines and brought together afterwards, so my thought that each section reads like a short story is justified).  You have to understand that the first novel is purely set up for the rest of the series.  My husband probably didn't remember that, knowing that the stories on the whole were good, and so didn't warn me that the Lensman don't actually exist in the first book.

So I'm reading about the history of two alien races, one purely good, the other purely evil.  I'm reading about how both races manipulate humans and our development over the centuries in a silent war (though one race is unaware of the other's existence).  Frustrated - and pressed for time with other reading obligations - I stopped reading.  I wanted to read about Lensman.  What was the rest of this?

Almost a year later, feeling bad that I hadn't even finished one of the Lensman books, I picked it back up.  I had to skim a bit of the previous chapters as I'd ended in a futuristic space setting where the Triplanitary fleet was fighting a pirate ship and three characters were kidnapped.

As I started reading this time, I could see the inklings of what I knew would become the Lensman (and the next book is called The First Lensman, so I know they're coming). Interesting spy equipment was used, a very alien alien race was introduced, Triplanitary (a government formed of Earth, Mars and Venus) created a new super ship.  Suddenly everything was happening, and unlike the previous sections, which were written as short stories with a common thread pieced together, this section started to feel like a novel, with characters that I could get to know and like.

While I remember the other sections being well written, the final section had the feeling of adventure I was expecting all along from a pulp SF story.  It was fun, it was imaginative, it had me on the edge of my seat wondering what would happen next.

It made me want to read the rest of the stories. :)

Having said that, there were a few things I didn't like so much.  Of the three protagonists in the final segment, one was a woman.  And while she was treated as though she was smart in some respects, there was still a somewhat condescending attitude towards her.  This was mitigated by the fact that on several occasions both she and the two men with her, were referred to as children and treated as such.  I know it was a product of its time and so I can't expect full female equalty, I found her portrayal an interesting mix between competency and the need to be protected.

Now that I know the backstory, I'm hoping to have the chance to read the rest of the novels in the collection.  With less interruption.
Email ThisBlogThis!Share to TwitterShare to FacebookShare to Pinterest
Posted by Jessica Strider at 15:29

I envy you the journey with the Lensmen you now embark upon. The first time I read these books (I was 11), they captured me. I read them consecutively, over the course of a week.
The super-science thrills yet the tender story of the family of the Lens uplifts.
Enjoy, but be lenient on "Doc" Smith about his slight misogynist tendencies. It was a long time ago.

I really liked his writing, I just had the wrong expectations. I suspect the next set of books will interest me more, now that I've got the background to the 'world'. I am looking forward to reading the next book in the series.

And my husband's warned me not to expect any female officers. It's only recently that I started paying attention to how the women are treated in books. That's the internet at work for you. Means I analyze more things in my review, which is good, though it can also mean lowered enjoyment in the books, which isn't as good.