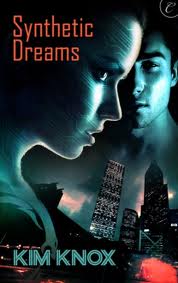 Vynessa Somerton grew up in N-District, a privileged member of society, who fell from grace for selling illegal glamor.  Now she lives in S-District and struggles to survive.  When the government starts vanishing other highly skilled programmers, she discovers she has a protector, an incredibly handsome man, who wants her to save his brother, who vanished and was replaced 7 years earlier, in return for saving her life.

As a novella Synthetic Dreams is necessarily fast paced.  Once the action starts, it doesn't let up.  The romance is also fast, but doesn't feel forced, getting hot at times and maintaining a nice simmer throughout the action.

The plot is intricate, with a series of revelations at the end you won't predict.  It's necessarily linear, with no deviations.  Even the romance serves to heighten the action rather than as a plot device itself.

While there are no info dumps, there is some stilted conversation as important information that the characters should already know is dealt to readers.  It's mostly unobtrusive, as the author does a good job of keeping these to one lines at a time.  The worldbuilding is unfortunately limited and makes the ending a little confusing, as the nature of the Halls and Tiers of the Mind are never fully explained.  Still, it's surprising how vividly Knox paints her world, given the limited description.

The characters don't have time to develop from stereotypes into three dimensional characters.  Vynessa has physical scars and low self-esteem when it comes to her attractiveness.  And while she's good with tech, she quickly realizes she needs Paul's help to survive what's coming for her.  Paul, meanwhile, is tall, dark and handsome with a perfect physique and the need to rescue his lady in distress.

Negatives aside, given the length of the story you don't really notice the problems until after you're done.  Though the ending could have been slowed a bit so as to explain a few things more thoroughly, it was a quick, intelligent read.

Out today from Carina Press.
Email ThisBlogThis!Share to TwitterShare to FacebookShare to Pinterest
Posted by Jessica Strider at 09:03