Book Review: City of Hope and Despair by Ian Whates 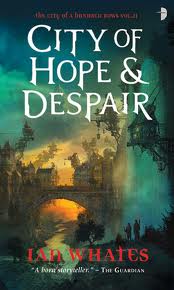 Pros: interesting characters, get to see the outside world and learn some of the world's history

Cons: powerful creatures are defeated with surprising ease (which may be realistic but it's also a bit disappointing)

The City of Hope and Despair is a novel about two quests.  The first involves Tom's first time outside Thaiburley as he, the assassin Dewar, Kohn, a sightless giant and the Thaistess, Mildra, journey to find the source of the goddess Thaiss's river.  A demon doesn't want them to succeed and has alerted another assassin to stop them.

Back in the city, Kat and her sister postpone their fight to the death in order to hunt down the returned Soul Thief, the monster that killed their mother.

It's nice to see Tom grow up a bit and realize that street smarts won't cut it in the real world where dangers are many and varied.  It's also fun to see him falling for the unobtainable priestess.  Seeing more of the world Whates has created as well as learning why Thaiburley has isolated itself was great after the very contained (in terms of worldbuilding) City of Dreams and Nightmare.  The Prime Master has more of a role in this book, and as he's a character much like the Patrician in Terry Pratchett's Discworld novels, that was a welcome addition.

Both quests encounter a number of difficulties, which keeps the book moving at a fast pace.  It was surprising how quickly the protagonists managed to overcome some of the obstacles in their path, and while they faced tragedy, their triumphs seemed easier won than expected given the power of their enemies.

The book ends on a double cliffhanger, with both quests leading to something new, to be picked up in the final volume of the series.  And given the quality of writing in the first two books, that's a book worth picking up.
Email ThisBlogThis!Share to TwitterShare to FacebookShare to Pinterest
Posted by Jessica Strider at 11:41