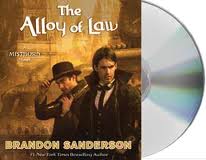 Waxillium Ladrian has been called back to the metropolis of Elendel from the Roughs to take over his deceased uncle's business.  No longer accustomed to life in the city, after spending so much time as a law keeper in the Roughs, Waxillium tries to subvert his natural tendencies in order to be a good lord.  But those intentions fall away when the latest in a spree of robberies and kidnappings hit too close to home.  Joined by his former partner Wayne and a clever young woman studying law at the university, Wax is determined to solve this case.

Sanderson has created a fantastic world.  The Alloy of Law takes place some 300 years after his Mistborn trilogy, but you don't need to read that in order to enjoy this novel.  A cross between fantasy and western - with a little steampunk thrown in - it's helped usher in a new subgenre of fantasy (others that do the same thing would be Gemma Files's A Book of Tongues, Christine Cody's Bloodlands and Mike Resnick's Buntline Special).  The mythology is touched on briefly, but the real treat here is the 'magic' of Allomancy and Feruchemy, both ways to manipulate metals.  Wax is a twinborn, meaning he can do both forms of magic - using his metal minds he can manipulate his weight and as a coinshot he's able to push on steel.  These abilities, combined with a steady hand and sharp wits make him a formidable lawman.

Wayne acts as necessary comedic relief from Wax's melancholy and seriousness.  Wayne's abilities are to create a speed bubble in which time flows faster for him (allowing him to dodge bullets and have private conversations in a room full of people) and the ability to heal himself quickly, provided he has health built up (done by being sick for an equivalent amount of time in advance).

The audiobook narrator, Michael Kramer, does an amazing job.  Not only is the narration crisp and clear - properly enunciated and easy to follow - but he does voices too!  Each character, when speaking has their own individualized voice.  And Wayne, who uses disguises throughout the book, is voiced with various accents.  It's absolutely remarkable and made listening to the book such a pleasure.

The book is well paced, with downtime and action all culminating in a great showdown.  And so much of the story is easy to visualize.  When Wax flies through the mist in his billowing mistcoat, guns blazing...  This book would make a fantastic film.

The only real 'complaint' I had, was that Wax managed to keep fighting even when subject to multiple injuries.  Given that he has no healing abilities (unlike Wayne) it seemed a bit far fetched that getting shot wouldn't faze him beyond a little bit of pain.  But that didn't detract from my enjoyment of the book at all.

If you want a different kind of fantasy, like westerns or just good storytelling, pick this one up.  It's the first in a series but wraps up nicely so if you don't feel like continuing you don't have to.  Though, the fantastic writing and fun characters will probably have you waiting impatiently for book two.
Email ThisBlogThis!Share to TwitterShare to FacebookShare to Pinterest
Posted by Jessica Strider at 17:08