**Please note, as this is the 3rd book in the series it's impossible to give a synopsis and critique without potential spoilers for the other books.  You can read my reviews for The Maze Runner and The Scorch Trials here.** 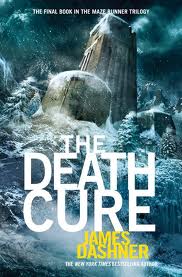 For Parents: a fair amount of violence (by the Gladers as well as against them) including murder; no swearing, no sexual content

It's time for the Gladers to learn why they've been put through hell.  Twice.  But Thomas and a few others decide they don't care.  All they want is to escape Wicked's compund and live their lives.  Things become complicated when it's revealed that someone close to Thomas has the Flare and Thomas may hold the key to the cure.

The Death Cure has the same level of action as the other two books with the exception that in those the teens have a purpose - surviving the trial.  In this book, that purpose is missing, causing a lag in the middle where they're not sure what to do next and simply react to outside forces.

Beyond that, it angered me that Thomas didn't get his memories back because I, as a reader, desperately wanted to know his role in Wicked and how the trials came to be.

Still, it ends with a bang and is a good conclusion to a decent series.
Email ThisBlogThis!Share to TwitterShare to FacebookShare to Pinterest
Posted by Jessica Strider at 11:25