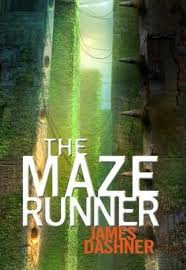 Thomas wakes up in an elevator with no memory of his life. When the elevator stops, doors on the ceiling open and he's helped out by a group of boys living in the Glade, surrounded by a Maze. Once a month a new boy arrives and once a week supplies come up the elevator. The furthest back anyone remembers is two years.

The day after Thomas arrives something unusual happens. The elevator opens again. This time, there's a girl inside.

As I've mentioned in previous teen reviews, there are two types of kid/teen books. Those you read and appreciate only as a youth and those that are equally good when you're an adult. I'd put the Maze Runner in the first category.

I'll start off with the positives, as my complaints contain spoilers to explain my points.

This is a great book for teen boys. As a loner in school I can sympathize with Thomas, both in his desire to learn more of what's going on as well as his need to keep his own counsel on matters of importance.

I especially liked how, despite the problems facing them, the boys set up a community that focuses on hard work and co-operation. Too often visions of boys in solitude show social break downs, pitting each one against the other or banding together in small violent groups (think: Lord of the Flies). In this book, when someone steps out of line they are dealt with. Violently. Not because the boys are incapable of other forms of justice (they have a jail cell) but because they can't afford the break down of order that could arise with rebellion or psychosis. In a tough situation they act with the good of the many in mind. And it works.

The glade was well planned, with the inhabitants utilizing specialized vocabulary to explain their existence and the problems facing them. It also allowed the author to have the kids use realistic language without filling the book with curses, which I thought was clever.

Now for the bad points - from an adult perspective. The Maze Runner is a book of questions. Thomas is teeming with them, and the reader is too. The problem is, no one knows the answers. While Thomas learns more about the glade and the maze, there's no one to answer the more important questions - what is the purpose of the glade/maze and why were these boys sent there. This is a series, with the idea that answers will be forthcoming in future books, but I found it frustrating that so little was revealed, even at the end of this book.

The book depends heavily on repetition. Thomas mentions several times how odd it is that he has memories of a life - movies, school, etc. - but can't remember faces or names of people and places. Another aspect is the repetition of information. Someone would mention something and a few paragraphs later someone else would ask about it. And sometimes the information is contradictory.

At the end of the novel a group of characters try a risky plan to escape the maze. They have to reach a certain place and type in a code. Doing so turns off the Grievers - the monsters that inhabit the maze. They know this, but afterwards someone questions what might have happened to those who remained behind and the consensus is that the Grievers got them despite the fact that the Grievers were turned off by the code.

But my biggest complaint was that I never liked any of the boys. There was nothing wrong with them besides being a bit annoying at times. They were all three dimensional characters, with good points and bad points. Unfortunately, we only see them through Thomas' eyes. And as Thomas' opinions of them changed, waffling between liking them and hating them, so too did mine as a reader. It meant that when people started dying at the end, I didn't care. That always disturbs me. Fictional or not, if the author is doing a good job I should feel something when someone dies.

Still, the book had enough positives that I'd recommend it for teen readers, if not necessarily their parents. The book has no sex, a little violence (mostly off screen) and lots of fake swearing.

Email ThisBlogThis!Share to TwitterShare to FacebookShare to Pinterest
Posted by Jessica Strider at 12:35