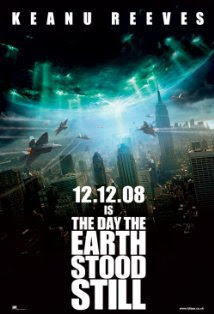 Pros: good message even if it fails in the delivery, great special effects, the US reaction to an alien landing was well portrayed

Cons: Jacob as a character is annoying and unconvincing in his change of heart, the ending ignores the premise of the film

As with the original, the premise of the movie is that of an alien coming to earth to give a message. The message is different, and in this case, goes unheard. The alien, Klaatu (Keanu Reeves), proceeds to the second part of his mission, to destroy humanity so that the Earth - one of only a few inhabitable planets - isn't destroyed by pollution and global warming.

While the original film focused on the alien and his interactions with people on earth, building suspense as to what his message was, in the new film the focus is on the relationship between Dr. Helen Benson (Jennifer Connelly) - one of the experts brought in to deal with the lifeform - and her step-son Jacob (Jaden Smith).

The opening sequence is incredible. Given the technology available today, the fanfare surrounding the arrival of the alien ship is much bigger. But that's the only thing the remake did better than the original.

Bottom line: go see the original. It's brilliantly made and has a message that's still worth listening to today.

Jacob is a very annoying character. He doesn't listen to his step-mom and complains endlessly. When he turns Klaatu into the officials and his mother is taken instead, his sudden change of heart towards the alien is unconvincing. As is Klaatu's sudden desire to stop the human's destruction.

Another difference was this Klaatu's casual disregard of violence. He smashes a car into a cop who's holding them up, and then heals the man. You'd think with the power he has he could have come up with another way of disarming the guy that wouldn't have required so brutal an action.

Oh, and the title no longer applies. In the original, Klaatu disrupts electricity, so the world is brought to a stand still. Nothing like that happens in this one. At no point does the earth stand still.

The ending ignores the premise that Klaatu came to tell humans to stop destroying the planet or they themselves would be destroyed. After stopping the destruction he simply leaves. There's no announcement telling the world they've got a reprieve, but they'd better shape up or the aliens will be back to wipe them out. Nope. He just leaves. So only a handful of people know why he came and only they know why he left. The rest of humanity - including those in charge who could set into motion the changes required - have no idea what happened.
Email ThisBlogThis!Share to TwitterShare to FacebookShare to Pinterest
Posted by Jessica Strider at 12:08

With the exception of knowing that the special effects for this movie were rendered using Linux, the rest of the film was annoying and illogical. Essentially, an alien comes to Earth to say, "You're destroying Earth with your practices. That is bad. So I will destroy Earth with MY practices. That is good. Oh, I've changed my mind. Byeeeeee."

Jacob was beyond annoying to the extent that I was fantasising different ways to rip him to shreds using methods that Klaatu shows in the movie. Jennifer Connelly was completely unconvincing as a scientist. I liked the revamped Gort. My verdict is that it was a complete waste of Linux run-time.

Agreed! If you haven't seen the original, it's fantastic and I highly recommend it. There are only a few cheesy special effects and the plot was well conceived.