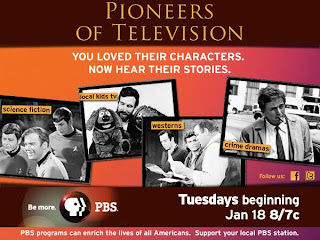 PIONEERS OF TELEVISION depicts the epic beginnings of the four featured television genres and explores the stories and influences of their groundbreaking pioneers. The hour-long episodes are:

“Science Fiction” (Tuesday, January 18, 2011, 8:00-9:00 p.m. ET/PT):
Storytellers Gene Roddenberry, Irwin Allen and Rod Serling created the storylines and characters behind the best-loved futuristic television of their time. But as Roddenberry’s “Star Trek” competed for ratings with Allen’s “Lost in Space,” each show’s creator aimed for a very different direction. This episode explores how Roddenberry and Serling (of “The Twilight Zone”) used the future as a stage for modern morality plays, and William Shatner, Leonard Nimoy, Nichelle Nichols and other science-fiction stars describe how they prepared to interact on-camera with a malevolent alien force … or, perhaps, a giant radish.

“Westerns” (Tuesday, January 25, 2011, 8:00-9:00 p.m. ET/PT):
Known everywhere as the quintessential American cultural identity, westerns filled small screens across the country night after night and were some of the most successful television shows in history. Fess Parker’s portrayal of Daniel Boone and Davy Crockett channeled the bravery, independence, honesty and rugged individualism of a young nation — and made Walt Disney enough money to build an empire. Westerns introduced James Garner, who starred in the television hit “Maverick,” where he developed the reluctant hero character that would cement his successful TV and film career. Garner, in his only recent interview, and Parker tell their stories, and Linda Evans recalls how two strong female characters emerged with her onscreen interaction with Barbara Stanwyck in “The Big Valley.” This episode also examines the success of Robert Conrad in “The Wild Wild West,” the popularity of “Bonanza” and the creation of the classic series “Gunsmoke” with James Arness — one of the longest-running television series of all time.

“Crime Dramas” (Tuesday, February 1, 2011, 8:00-9:00 p.m. ET/PT):
As viewers reveled in being transported to shadowy underworlds, creative geniuses emerged in the forms of Jack Webb (“Dragnet”), Desi Arnaz (“The Untouchables”) and Bruce Geller (“Mannix” and “Mission: Impossible”). Groundbreaking actors Bill Cosby (“I Spy”) and Angie Dickinson (“Police Woman”) reveal the methods behind their successes as the first African-American and breakthrough female lead characters in a television series. Barbara Bain and Martin Landau share the secrets behind the innovative hit “Mission: Impossible”; Peter Falk’s friends and colleagues recall the evolution of his “Columbo” character; and James Garner and series creator Stephen J. Cannell recount the success of the “The Rockford Files.”

“Local Kids’ TV” (Tuesday, February 8, 2011, 8:00-9:00 p.m. ET/PT):
Local kids’ programs shaped the childhoods of millions of American children in the early years of television. Performers such as Willard Scott and William Shatner honed their skills performing on live TV with small budgets and little support. With the flimsiest of second-hand store costumes and their own imaginations, they learned how to make their audience laugh, smile and think. One early talent, Stan Freberg, got off the bus in the middle of Hollywood, became a cartoon voice talent and created “Time for Beany” — a show that captured seven out of 10 viewers, including Albert Einstein, during its run in Los Angeles. Freberg’s story is told along with the stories of legendary Muppets creator Jim Henson (who started on local television as a teenager), actor Chuck McCann (originator of New York’s “Puppet Hotel”), Larry Harmon (who popularized Bozo the Clown) and Nancy Claster (who developed the Baltimore kids’ series “Romper Room” — the first franchised show in television history).
Don’t miss selected PBS programs streaming free online, the day after broadcast, on the PBS Video Portal (pbs.org/video/).
Email ThisBlogThis!Share to TwitterShare to FacebookShare to Pinterest
Posted by Jessica Strider at 10:55