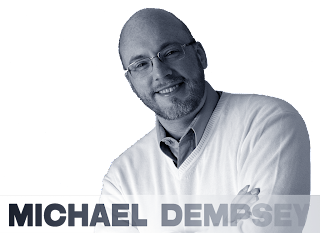 
> What is Necropolis about?


Paul Donner is a NYPD detective with a drinking problem and a marriage on the rocks.  Then he and his wife get dead—shot to death in a "random" crime.  50 years later, Donner is back—revived courtesy of the Shift, a process whereby inanimate DNA is re-activated.  This new "reborn" underclass is not only alive again, they're growing younger, destined for a second childhood. The freakish side-effect of a retroviral attack on New York, the Shift has turned the world upside down.  Beneath the protective geodesic Blister, clocks run backwards, technology is hidden behind a noir facade, and you can see Elvis at Radio City Music Hall every night at nine.  In this unfamiliar retro-futurist world of maglev Studebakers and plasma tommy guns, Donner must search for those responsible for the destruction of his life. His quest for retribution, aided by Maggie, his holographic Girl Friday, leads him to the heart of the mystery surrounding the Shift's origin and up against those who would use it to control a terrified nation.

> In the past you've written TV episodes and plays, and are an award-winning stage actor and director. What made you try your hand at writing novels?
Throughout my theatre, TV and film career, writing a novel stayed in the back of my head—a childhood dream.  It's the hardest form to master, so I was intrigued by the challenge.  The other reason was geographic.  When I moved home a few years ago to be closer to family, it seemed the logical thing to do.  To be a successful in TV or film, you have to live on a coast, but you can be a novelist anywhere.
> Does having an acting background help with your writing?
Absolutely.  A good actor analyzes a script to discover its structure and themes—exactly the things you need to construct when writing. Also, an actor analyzes what motivates his character and why, what tactics he uses to get what he wants, what his stakes are and what obstacles lie in his way.  I think about these things when writing characters—the more obstacles you can throw at them, and the higher you can make their stakes, the more dynamic and exciting the story will be. 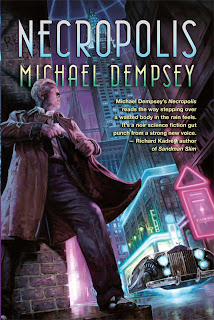 > Why do you think zombies/reanimated dead have such staying power?
We're terrified of death more than anything else, and as much as we'd love to come back, we know it's unnatural.  If people are resurrecting as zombies, something is terribly wrong with the Universe in a much deeper way than simply having to survive their attacks. Being eaten is a also primal fear that goes back to our earliest days as a species, and cannibalism is even worse—a taboo that goes right down to our DNA.  The combination of these horrors taps into the most primitive terrors of our psyche.
Don't laugh, but even though people revive from the dead in NECROPOLIS, when I was writing it, I never really thought of them as a variation on the zombie motif, since the method of their resurrection is scientific, not supernatural.  Despite the youthing issue, they're essentially themselves again.
> What kinds of books do you read for fun?
I'm an omnivore.  But I do have a weakness for genre fiction—horror, science fiction and crime novels rank at the top of the list.  But I also love the classics and history.  Probably because I'm actor, I'm also a huge Shakespeare fan.  If you don't love to read, don't be a writer.  Writers have to be voracious.
> If you could, would you change places with any of your characters?
Absolutely not!!  Necropolis isn't the nicest place to live.
> What was the hardest scene for you to write?
The parts about Donner's failed marriage.  I'm divorced, and although I think that drawing upon the memory of that pain and guilt and confusion made the writing richer and more believable, it was still very difficult to re-experience.
> When and where do you write?
I write in my office, first thing in the morning, before life can intrude.  I also "write" on walks and late at night before bed, when my mind is more free to daydream.  I always keep a pad on the nightstand.
> What’s the best/worst thing about writing?
Best thing: getting to create worlds and stories and then share them with others (and maybe even earn a little money doing it).  It's the best job in the world.  Worst thing: I suppose it's rejection and criticism.  Putting your writing out there is a very courageous thing, in my opinion...it came from deep inside you, you're vulnerable, so when people are callous with their criticism it can be very difficult.  You have to develop a really tough skin and keep working to believe in yourself to survive. 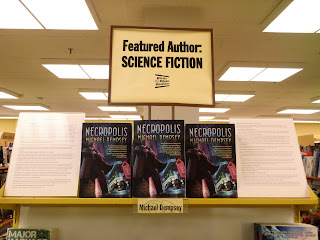 > What is something you didn’t know about the publishing industry before you had your first book published?
I am stunned and grateful how generous and supportive other fiction writers have been to me.  It's often not often that way in film and television—it's a very cut-throat business.
> Do you have any advice for hopeful authors?
The most critical trait of a successful writer is perseverance.  Many talented people fall by the wayside and give up.  Also:  writing is rewriting. Don't be satisfied with your first draft.  Get input.  Never fall in love with your own writing to the extent that you can't "kill your babies" when they don't work.  It can be painful but necessary.  Stay open to constructive criticism.  No one is so good that they can't grow.
Write what you love, not what you think will sell.  Writing is a long process, so you better be incredibly turned on by the tale if you're gonna make it through.  Write what you yourself would love to read.
Finally:  get out there and LIVE!  There is no replacement for life experience.  If all you do is sit in a room and write, your writing will be two-dimensional and derivative.
> Any tips against writer's block?
Force yourself through it.  Write something no matter what.  Five pages of crap is better than no pages, if for no other reason than you're practicing discipline.  Writing is work, and the muse won't always be there to magically inspire you.
> How do you discipline yourself to write?
Well, look, you have to love it.  There's no replacement for that.  Everybody wants to write a book, but you have to love the process, otherwise it's a burden.  Carve out a special time for yourself that allows no intrusion and stick to it, no matter what.  (If the house is on fire, you're allowed to stop.)
> How many rejection letters did you get for your first novel or story?
I received about 10 rejections from agents before one said yes.  And she found a publisher in less than four months, which is incredibly fast.  This is all very atypical.  Many talented writers must wait a long time for the "stars to align," so I consider myself blessed.  Hopefully that also means the book is good!
Email ThisBlogThis!Share to TwitterShare to FacebookShare to Pinterest
Posted by Jessica Strider at 11:05