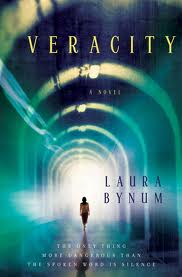 Cons: the novel is less about the resistance and overthrowing the government than it is about one woman's journey

Harper Adams was six when the pandemic spread to America, killing half the population.  Now, she's a Monitor, assigned to use her special abilities to read the truth of people when their recording chips capture the use of Red Listed words.  She also retroactively determines whether the punishments administered by the Blue Coats (beatings, rape, torture, execution) are appropriate to the crimes committed.

But the Red Listed words are growing in number, and now include the name of Harper's daughter, Veracity.

Harper is recruited by the resistance to help bring down the totalitarian government.  This is her story, told partially through flashbacks, explaining how the world became what it is.  It's the story of a woman who is willing to make personal sacrifices so that her daughter's world will be a better place.

First person narrative works very well for this book.  It gives Harper's story an immediacy third person narrative couldn't have achieved.  Her attempt to leave a high position in the Monitors creates a lot of tension as she comes face to face with the Blue Coats and their punishments.  And the unveiling of her past brings this new world into horrifying focus.

The book is terrifying because it's easy to imagine all of this happening, one act at a time.  We've already given up some liberties due to fear of attack, plague, etc. Veracity merely takes those losses to extremes, one freedom at a time.  One word at a time.

As a character, Harper is a fascinating woman.  She's grown up in this world and has had to lie - to herself and others - in order to survive in it.  She has prejudices (well deserved) and weaknesses.  She also has strengths and acts on the desire to be free despite the potential consequences.

I mark the fact that this book is more about her personal experience rather than about the resistance and overthrow of the government as a con because that's what some people will be expecting.  For me the book works great as it is.  There's a lot of tension and some action, but if you're looking for a war focused book, this isn't it.

It's a terrifying glimpse at a possible future that I sincerely hope never comes true.

Email ThisBlogThis!Share to TwitterShare to FacebookShare to Pinterest
Posted by Jessica Strider at 12:37