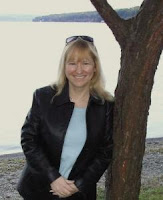 
When a mysterious plague hit Boston, turning two thousand of its residents into sentient zombies, the quarantine zone became Deadtown, home (by law) to Boston's paranormals. It's also home to Victory Vaughn, a shapeshifter who kills other people's personal demons for a living. In Deadtown, Vicky does battle with the Hellion who killed her father. In Hellforged, she struggles to protect her friends and prevent a long-lost relative from unleashing an ancient power more terrifying—and deadly—than anything she's encountered before.

You were an avid reader as a child.  What kind of books did you read?  Have your reading habits changed over time?
If you put something down in front of me and it had words, I’d read it. (I’m still that way.) I was crazy about fiction. (I’m still that way, too.) Fairy tales and fantasy stories. Historical fiction, especially if it was set during the American Revolution. I went through a phase when  I’d read anything with horses in it. But I particularly loved mysteries: Nancy Drew, The Hardy Boys, those short Encyclopedia Brown solve-it-yourself mysteries.

In college, I majored in English and my tastes became more literary. I love the classics. But I still love mysteries and of course urban fantasy. It’s an incredibly fun genre, and I know my younger self would have approved.

What made you want to be a writer?
Because I read so much as a kid, I think it was natural for me to want to try my hand at writing. I got so much pleasure out of reading stories, I wanted to write them, too.
In the books you’ve written, who is you favourite character and why?
I’d have to say Vicky from my Deadtown series is my favorite. She’s smart, resourceful, and brave (a lot braver than I am), yet she wrestles with anger and with guilt from her past. She’s someone I’d like to go out for a beer with, even though she insists on drinking that flavorless stuff labeled “lite.”
Would you want to live in the zombie, werewolf, etc. infested Boston of your books?
Only if I could have some cool ability like shapeshifting to make up for all the hassles. I’ve got some pretty loud neighbors right now, but I’d take “loud” over “gee, your blood smells yummy” any day.

What was the first novel (published or unpublished) that you wrote and how long did it take to write it?
I have an unpublished “practice” novel that’s a combination of historical novel and contemporary ghost story. I spent a couple of years working on it part-time. I learned tons from writing it. Occasionally I wonder if I should pull it out and see if I can do anything with it. But it was a learning experience, and I think that novel will remain (rightfully) hidden away.
Does having an English PhD help with your writing?
Rather than “help,” I’d say it doesn’t hurt my writing too much. Academics approach writing very differently from novelists. When I began trying to write a novel, I suffered from “the anxiety of influence” (to steal a phrase from Harold Bloom). I’d studied great works of literature, and that context made trying to write paralyzing at first. On the other hand, I’d spent years reading and thinking deeply about how stories work. Once I shook off my sense that writing was an unspeakably audacious act, I could use my sense of story to structure my own writing.

You started your career as a medievalist.  Why did you turn to writing urban fantasy rather than medieval-based fantasy?
I was reading urban fantasy for fun when I had an idea for a protagonist: someone who kills other people’s personal demons for a living. The character seemed more suited to a contemporary setting than a medieval one, because of modern ideas about psychology and also the instant gratification of hiring someone to resolve psychological problems. When I was doing early character work on Vicky, one of the things she said about her job was “I’m a lot like a psychoanalyst, except instead of a couch I use a flaming sword.” But Deadtown’s roots are medieval; the mythology behind Vicky’s race of shapeshifters is based on the Mabinogion, a collection of 12th- and 13th-century Welsh legends. In Hellforged, Vicky delves further into this mythology.

When and where do you write?
I write in three places: my living room (mornings), my home office (afternoons), and a local coffee shop (evenings). In the summer, I’ll sometimes write on our deck. Mixing it up among different locations helps to keep me from getting stuck in a rut.
What’s the best/worst thing about writing?
Worst thing: The Muse doesn’t care about deadlines, but my editors do.

Best thing: Getting paid to play with my imaginary friends. And also the feeling of deep satisfaction that comes after a good writing session. There’s nothing like it.
What is something you didn’t know about the publishing industry before you had your first book published?
My day job is freelance editor and nonfiction author, so I’ve been familiar with the publishing process for a while. When I sold my first novel, however, I wasn’t prepared for how slowly fiction publishing moves, as compared to the technical books I edit and write. Let me explain it this way: In the eighteen months that passed between the time I got an offer for Deadtown and the time that novel was published, I proposed, sold, wrote, and published six nonfiction books. 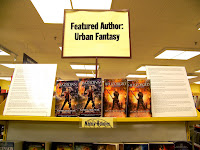 Do you have any advice for hopeful authors?
Write every day, just as you’d practice the piano every day if you hope to become a professional pianist. Read widely, both inside and outside your genre. Join a critique group; it will give you feedback from readers, thicken your skin to criticism, and sharpen your sense of structure, pacing, character development, and dialogue. And persevere. Publishing isn’t a game for people who give up easily.
Any tips against writers block?
Write something--it doesn’t matter what. There are websites that offer writing prompts, for example. Set a timer for five or ten minutes, pick a prompt, and go. Lower the stakes. This isn’t your novel, it’s not the big scene--it’s just a writing exercise. One trick I use is to write a dialogue with myself about what’s going on in the book. I ask myself questions about a scene, and during this “discussion,” I often come up with answers and ideas that just weren’t flowing as I was trying to write. Whatever you do, though, don’t wait for inspiration to strike. Inspiration arises through work. Only when you’re wrestling with a problem will the answer come to you.

How do you discipline yourself to write?
The Internet makes it much easier for writers to do research, to connect with readers and other writers, and to promote their work. It’s also a huge distraction. I find I do best when I stay offline until I’ve met my word count for the day. After I’ve pounded out the words, then I can check my email, see what’s happening on Twitter and Facebook, write a blog post. To my amazement, those things really can wait.
How many rejection letters did you get for your first novel or story?
When I started writing fiction seriously, seven or eight years ago, I got lucky with the first story I finished. I submitted it to a small literary journal, which accepted it. I was thrilled and thought, “Maybe I really can be a writer.” I held onto that thought as rejection slips rolled in for later works. I queried 50 or 60 fiction agents before one offered representation. And then it took her a year to sell my first novel, a mystery, to a small press. With Deadtown, I got lucky again; the first publisher that saw it offered me a two-book deal and later bought two more in the series. And I hope to keep Vicky’s story going beyond that, as well.
Email ThisBlogThis!Share to TwitterShare to FacebookShare to Pinterest
Posted by Jessica Strider at 10:46

I read all the 'Nancy Drew and Hardy Boys' I could get my hands on in elementary school. Some of my 'rich' friends had the entire collections.
The phoenix legend for your novels really sets them apart from other urban fantasy.

I would've loved to own the entire Nancy Drew collection! But I did work my way through all the books thanks to my local library.