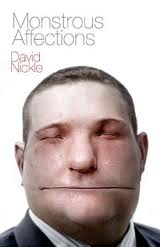 Cons: several stories require some thought to understand, with one being beyond my comprehension

This is a great collection of horror stories.  There's variety in length and subject matter, with most having horrifying twist endings of some sort that make you rethink what you believed was happening in the story.  Mr. Nickle brings in different mythologies, which was fun.  And they all deal with affection in one way or another, most regarding family and a few with other topics.

There were only two stories I didn't like and in one case that was because I didn't quite understand the ending.  With a few other stories it took some thought to realize their brilliance, which I did like.

Mr. Nickle uses your natural assumptions against you.  For example, you assume Janie in "Janie and the Wind" is a victim.  Turns out that's not entirely the case.

My review code for short stories is ^^ for 2 thumbs, ^ thumbs up, v thumb down)

^^ "The Sloan Men" - Judith visits her boyfriend's parents and discovers the man she loves is not WHAT she remembers him as. A very unsettling story.

^ "Janie and the Wind" - Janie's husband gives her a beating and leaves her stranded without food on a small island in Georgian Bay.  A storm's coming and she's hungry.  I found it a little long and rather strange.  Great twist ending.

^^ "Night of the Tar Baby" - A father recently released from prison takes his two kids out to make a tar baby.  He uses the creature to teach those around him about anger management.  Another unsettling story, told from the young daughter's POV.

^ "Other People's Kids" - A rest stop lunch break turns weird when 13 year old Sam spots a kid with really sharp teeth.  A strange tale about growing up and leaving childhood behind.  Sam makes some interesting choices.

^^ "The Mayor Will Make a Brief Statement and Then Take Questions" - The mayor speaks of the city's grief over the murder of a young boy.  Surprisingly short and deeply profound - after a bit of thought.

^ "The Pit-Heads" - Four painters make a terrifying deal to improve their craft.  An interesting take on vampires.  Mr. Nickle's father, a painter, has done some paintings for the story.  You can read the story with the paintings online (under a creative commons license).  I managed to see the paintings just before reading this story, and they do make it come to life.

v "The Slide Trombone" - Three musicians at a cottage wonder how they knew to pick up the 4th, a trombone player whom none of them had met before.  I found this story confusing.

^^ "The Inevitability of Earth" - A man tries to find his grandfather to learn the secret of human flight.  Unsettling with a very creepy ending.

^ "Swamp With and the Tea-drinking Man" - A swamp witch is in for a very bad day, filled with regrets.  Another story that took some thought to figure out.

^^ "Fly in Your Eye" - Discusses a rather creepy medical condition.  Another very short and extremely creepy story.

^ "Polyphemus' Cave" - A man returning home for his estranged father's funeral sees a cyclops and hears an odd circus tale.  Originally published in Queer Fear 2, this is another unsettling story, about what horrifying things can happen in families when one person doesn't act the way other members would like them to.

^ "The Webley" - Two boys make up after a fight to deal with a threatening dog.  A look at how children act and their cruelties to one another.

It's a strong collection of thought provoking horror stories.  I look forward to reading his novel, Eutopia, out this May.

And if you want to get a feel for his storytelling, here's a video of the author reading "The Mayor Will Make a Brief Statement and Then Take Questions" from the book launch for Monstrous Affections held at Bakka-Phoenix Books in Toronto, November 2009.  The story intro starts at 1:30.


Email ThisBlogThis!Share to TwitterShare to FacebookShare to Pinterest
Posted by Jessica Strider at 09:00