For readers 12 and up who want some fantastic elements to make their history more palatable, there's Leviathan by Scott Westerfeld, coming out in October of this year. It's an alternative history steampunk, a sub-genre that is becoming very popular.

The book begins with two characters in very different circumstances. One is a girl, dressing up a boy, in order to join the British airforce. The other, Alek, is an Austro-Hungarian prince who's just been orphaned. The death of his parents sparks a war (World War I) and that's when things get interesting.

The book shows many different things. There's the ideological differences of nations (Germany & Austro-Hungary on one side, France, England and Russia on the other) and religious/technical differences (Darwinists vs 'Clankers' - those who use machines). The Darwinists have created creatures from the lifethreads of various animals to perform jobs that machines do in nations that consider such tinkering abominable.

Scott Westerfeld does a great job of realizing the steampunk machines on one side of the war as well as the more interesting 'beasties' on the other. My only complaint here is that the description of the airship Leviathan isn't as detailed as I would have liked. It was hard for me to picture some of the aspects of the beast. Maybe a cross-section diagram of the ship would have helped in this respect. 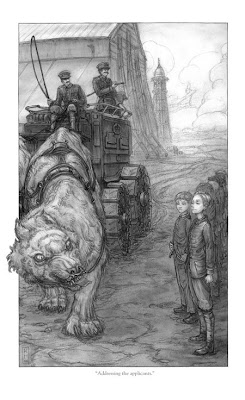 Speaking of diagrams, the gorgeous artwork throughout the book by Keith Thompson really brings the story to life. Seeing the beasties, the mechanical walker and the characters helps one better enter this world.

Beyond that, the story was tight and fast paced, though I found Alek a little tiresome as the book wore on. He never seemed to learn from his mistakes - always acting first and thinking later. Which isn't out of character as he's only 15. As an adult I simply wanted him to smarten up a bit.

Be prepared to wait for the sequal. This is a great beginning, explaining the background to the war, the people and all of the technologies involved. There's definitely more to come.

And the coup de grace? Westerfeld has an afterward explaining the actual history vs his imagined one - so kids can have a fun story and learn what was true and what wasn't. And it's an interesting mix.
Email ThisBlogThis!Share to TwitterShare to FacebookShare to Pinterest
Posted by Jessica Strider at 12:27

I totally agree with this review it definetely captures the brilliance of Leviathan.