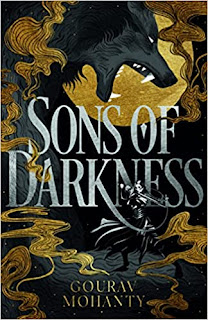 SOME BALLADS ARE INKED IN BLOOD.Bled dry by violent confrontations with the Magadhan Empire, the Mathuran Republic simmers on the brink of oblivion. The Republic’s Leaders, Krishna and Satyabhama, have put their plans in motion within and beyond its blood-soaked borders, to protect it from annihilation. But they will soon discover that neither gold nor alliances last forever.

They are, however, not the only players in this game.

Mati, Pirate-Princess of Kalinga, must mend her ways if she is to be a good wife. But old habits die hard, especially when one habitually uses murder to settle scores. Karna, the gifted son of a lowborn charioteer, hopes to bury his brutal past, but finds that life is not generous in offering second chances. The crippled hero-turned-torturer Shakuni struggles in the maze of daggers, that is politics, leaving little time for him to plot the revenge he craves.

Alongside a cast of sinister queens, naive kings, pious assassins and predatory priests, these dubious heroes will converge where the Son of Darkness is prophesied to rise and break the World, even as forgotten Gods prepare to play their hand.
Email ThisBlogThis!Share to TwitterShare to FacebookShare to Pinterest
Posted by Jessica Strider at 11:08