Book Review: For the Wolf by Hannah Whitten 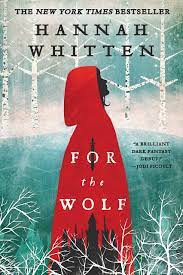 Redarys is the second daughter born to Valleyda’s royal family. The first daughter is for the throne, the second is for the wolf. After she enters the Wilderwood Red discovers the stories she’s grown up with are mostly true but that the Wolf is not the monster she expected. Her twin sister Neverah resolves to bring Red back, not realizing that destroying the forest will destroy her sister and unleash the monstrous shadows it holds captive.

Though the title and cover make it seem like a retelling of Red Riding Hood, the book is actually more Beauty and the Beast. It’s a very loose adaptation with a lot of unexpected twists and a larger underlying plot.

The worldbuilding was good, with several nations and mentions of trade and religion. The Wilderwood was interesting in how it trapped people inside and how it interacted with the Wolves.

I loved the slow building romance between Red and Eammon. It felt very organic, and though I did wish they were more open with each other their various traumas made it hard for them to trust and risk losing what they’d gained. Their interludes created some needed breaks to the tense atmosphere.

The story doesn’t slowly build tension, every time something bad happens it’s an immediate 10 on the tension scale. I found the book somewhat exhausting as a result of it’s flipping between 0 and 10 so often and had to read the book in bits and pieces.

The dangers were fairly repetitive with the Wolves dealing with the same things over and over again.

The ending paves the way for the sequel with some major events still needing resolution.
Email ThisBlogThis!Share to TwitterShare to FacebookShare to Pinterest
Posted by Jessica Strider at 09:45