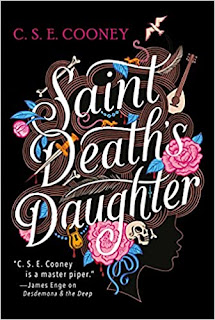 Miscellaneous ‘Lanie’ Stones is the first necromancer born in over 100 years in the city of Liriat. Her family has been the right hands of the ruling Brackenwild family since the founding, acting as royal executioners and assassins. Which makes Lanie’s allergy to violence a challenge to manage. So she’s raised by the family’s revenant, Goody Graves. After a series of events leaves her older, sadistic sister Nita in charge, Lanie’s life changes. As she grows both in wisdom and power, Lanie struggles to live up to the expectations of the past and forge her own future.

Lanie is a wonderful character, surprisingly kind and loving despite her limited human contact and dysfunctional home life. Necromancy is usually depicted as evil and gross, so seeing Lanie’s pure joy in her power and love of the creatures she reanimates is nice to see. I also loved this depiction of the goddess of death.

The larger cast is a mix of nice and terrible characters. Nita is simply horrifying, willing to use her power of fascination to force people to do her will. I had real sympathy for Mak and the abuses he suffers. Canon Lir was intriguing, and the friends Lanie makes later in the book were a lot of fun to hang out with.

The world-building was great, with several distinct cultures represented. I was impressed with the depth of detail given to each culture, making them feel very real.

The story is slow moving at times, giving you the chance to really get to know the characters and world.

The ending left me feeling melancholic. This is the first book in a trilogy so while a few story threads are tied up, there are some major threads left unresolved. It’s an ending that I had to sit with for a few hours to better understand and appreciate.

It’s a great book that does some unique things.
Email ThisBlogThis!Share to TwitterShare to FacebookShare to Pinterest
Posted by Jessica Strider at 09:48