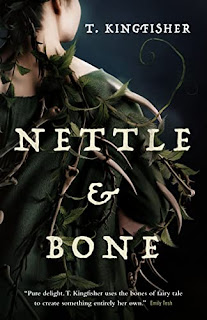 Pros: light romance, fun magic, interesting world
Cons: some readers might be put off that certain matters are skirted over

Marra’s older sister is married to the prince of their larger neighbouring kingdom. After a death and some unpleasant revelations, Marra is determined to save her sister, like a hero in the stories she read as a child. But how does one become a hero, and how do you kill a prince?

The opening of this book grabbed me by the throat and immediately pulled me into its world. Though the plot has some unpleasant elements the book on the whole is surprisingly upbeat. I loved the subtle humour, especially when the romance thread entered.

Marra doesn’t do politics well, which is a problem for a princess. It was nice seeing her build a group of friends who helped with her quest. They’re a quirky bunch and a lot of fun to read about. I loved Kingfisher’s take on the godmother mythos.

The magic is never explained and appears in various guises. There’s a goblin market, a woman who can talk to the dead, and Marra is able to complete two impossible fairytale quests.

I needed a lighthearted read so I appreciated that the book glossed over the disturbing elements of child death and physical abuse. Some readers might be put off the fact that the author doesn’t show the full fallout of these impactful events. I had the impression Marra was supposed to be neurodivergent, and so she doesn’t pick up on things the way others do. As the point of view character, this colours how the reader sees the world as well.

I found the story quick moving and compelling. This is an uplifting book with an excellent wrap-up that leaves you feeling content with the world.
Email ThisBlogThis!Share to TwitterShare to FacebookShare to Pinterest
Posted by Jessica Strider at 09:10