The Phantom of the Opera: The Graphic Novel - Script, art, and letters by Varga Tomi 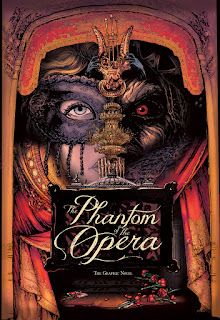 Christine Daae’s astounds the Paris opera house with her voice despite having no teacher. Even her old childhood friend Raoul, the Vicomte de Chagny, is entranced. But she has a secret teacher, the opera ghost that’s terrorizing the theatre. The ghost is a jealous master, who demands Christine’s affections for himself.

This is an adaptation of the novel by Gaston Leroux. If you’re only familiar with the Andrew Lloyd Weber musical there are a fair number of differences. The general story is the same and Tomi’s adaptation hits all the necessary beats.

The art, though not my preferred style, fits the subject matter. The colours are subdued with a lot of dark shadows. Faces are very expressive. The author apparently did research for the book in Paris, and illustration of the opera house that begins chapter one is magnificent in its photo realism. The costumes and opera house are lavishly detailed. The ghost looks suitably horrifying with his red eyes and missing nose. The illustrations really bring home the horror of Christine’s position.

It’s a faithful adaptation of a great book.
Email ThisBlogThis!Share to TwitterShare to FacebookShare to Pinterest
Posted by Jessica Strider at 09:55