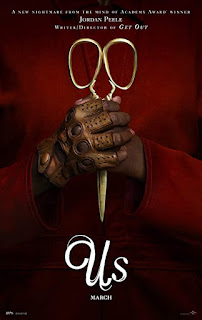 Cons: some of the backstory doesn’t fit if you think about it too much

It’s the start of a family’s summer vacation and the mother reluctantly returns to the beach where she had a terrifying encounter as a child. That night a strange family of doppelgangers shows up at their house.


This is a very scary movie. While there’s some blood and gore, for the most part it’s psychological horror, the kind of horror that will have you jumping at shadows while you wonder what’s going to happen next.

There are a few inconsistencies with the backstory that makes up the deeper plot, but you’ll think of those after the film’s over not while you’re watching it, trying to figure out what’s going on.

The actors are brilliant in their roles. Each does their human and doppelganger’s parts. I was particularly impressed by Evan Alex who played the son, as his doppelganger seemed especially challenging to play.

I expected the film to play out on a small scale - with only their family affected - so I was surprised when things branched out. There were several twists I didn’t see coming.

If you haven’t seen it and like to freak out, this is a good film.

Email ThisBlogThis!Share to TwitterShare to FacebookShare to Pinterest
Posted by Jessica Strider at 13:28