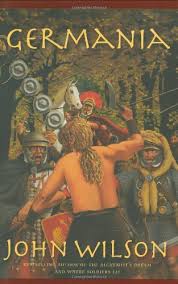 Pros: historical accuracy, shows both sides of the conflict

During the eruption of mount Vesuvius, Lucius Quinctillius Claudianus rushes to record the events of his time as a Roman legionary serving in Germania.

The frame story of the old Lucius is told in the first person, present tense. But when the narrative switches to the past, it’s third person and occasionally alternates to the point of view of a female barbarian he befriends, Freya.

As far as I can tell the author did a remarkable job of maintaining historical accuracy. There’s more detail at times than I needed about the various Roman legions and where Lucius was marching in relation to other groups, but on the whole I loved the depth of detail in this novelization.

Bringing in Freya as a point of view character allowed the author to examine several issues from both the Roman and Germanic perspective. Lucius questions the Roman way a fair bit (largely due to Freya’s influence) but it’s still nice to see the various Germanic tribes humanized and shown off as being different from rather than lesser than the Romans. The author also does a great job of showing that neither side is inherently evil or good, and that when necessary, both are capable of horrific acts of brutality.

There are some graphic descriptions of brutal events. Some people are crucified, decapitated heads are staked to trees, there’s mention that one group of female prisoners will likely be raped before being sold into slavery. While mentioned once or twice, there’s no sexual content in the book.

If you’re interested in the Roman military and its interactions with different tribes, this is engaging and accurate.
Email ThisBlogThis!Share to TwitterShare to FacebookShare to Pinterest
Posted by Jessica Strider at 10:37