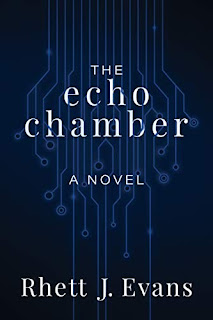 A Silicon Valley scandal sets off a chain of dystopian events in this topical and twist-laden thriller about virtual heists, social media, and second chances.
Mike is a Silicon Valley wunderkind who stood idly by while his company launched an addicting social media platform that made the world take a turn for the worse. He did nothing when an outrageous tech scandal pushed a polarized country to the brink of collapse. Then, after becoming trapped in a loop of his own memories, he is doomed to watch society fall apart over and over. Only by crossing paths with Charlotte Boone—once Hollywood’s up-and-coming royalty—does a kink appear in the pattern. With a daring heist in both the virtual and real worlds, Charlotte may hold the key to burning it all to the ground: the company, the lying pundits, and the echo chamber itself.
Email ThisBlogThis!Share to TwitterShare to FacebookShare to Pinterest
Posted by Jessica Strider at 09:02