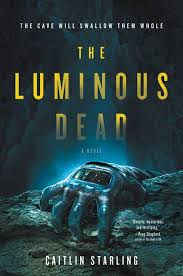 Gyre Price lied on her application and took the caver job expecting to earn enough money to leave the planet and find the mother who abandoned her when she was a child. She didn’t know she would only have a single handler on the surface, one who can’t be trusted. Nor did she expect that spending so long in the darkness and isolation would make her see things… hear things…

I bought this book on the recommendation of some authors I follow and so never read the back cover to find out what the book was about. I assumed - from the cover and random comments - that it was about zombies on an alien planet. It’s not.

Once I realized what the book actually was, the story of what happens to a person when they are isolated and afraid, I settled in for a different kind of horror. Gyre’s paranoia ramps up when she realizes she can’t trust the only human link she has, kicking off an intense love-hate relationship with the only person who can save her life if things go bad. And things go bad.

In addition to the natural cave environment and the dangers it poses (climbing, falling, equipment failure, swimming, etc) there’s also a creature on the planet that can swim through rock. No one understands what calls the tunnelers, but calling one is usually a death sentence.

This is a very intense read. At times Gyre isn’t sure what’s real and what isn’t and waffles between rational decision making and pure paranoid outbursts. The ending is especially tense and I really wasn’t sure what would happen to her.

If you like survival stories, this is great.
Email ThisBlogThis!Share to TwitterShare to FacebookShare to Pinterest
Posted by Jessica Strider at 10:20