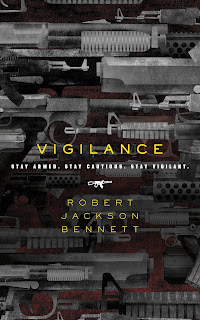 In a future America, the hit reality TV show is Vigilance, where active shooters are sent into unprepared locations to see if the people there have what it takes to survive.

This novella is told through the perspectives of two people. First is John McDean, a marketing man and head of Vigilance’s production team. The second is Delyna, a bartender whose patrons are hyped to watch the next episode of their favourite show.

What’s also here is some actual reasons behind why such a show is popular and what that says about the people who would watch it. Murder as reality TV (or just people being hunted for sport) isn’t new in the SF field. But quite often the violence is left unexamined. Yes, there’s often a vague hand wave to the fact that it’s a form of oppression, but Battle Royale is one of the few stories I can point to (and I’ve read/seen quite a few of these in long and short form) that actually posits a reason for why such a show is put on in the first place (though Battle Royale had a very different reason for it than Vigilance). Not only does Vigilance make you think about the story and society in general (especially today’s gun culture in the US and all of its mass shootings), it works to make the violence in the story - which could otherwise be gratuitous - deeply uncomfortable and horrifying instead of entertaining. These aren’t characters in a book fingering their guns. These are your neighbours, your friends, your family members.

Delyna’s got some great scenes, especially once the TV show starts. Her story is where the social commentary really shines, in several ways.

It’s short enough to read in one sitting, but will stick with you long after.
Email ThisBlogThis!Share to TwitterShare to FacebookShare to Pinterest
Posted by Jessica Strider at 10:57