Book Review: Armed in her Fashion by Kate Heartfield 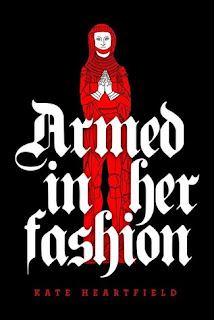 Cons: writing was a little dry at times

When her revenant husband returns to the besieged city of Bruges and reveals he’s hidden a fortune, Margriet de Vos demands her rights: a third of that wealth belongs to her, the rest to their daughter. Her husband now serves the Chatelaine of Hell, and intends to give her this gold. But Margriet won’t be deterred. Neither war, the King of France, nor Hell itself will keep her from getting her due.

Meanwhile, Claude a transgender man-at-arms and former guest of the Hellbeast also wants the de Vos treasure, or rather, a mace he unwisely sold to Margriet’s husband and now needs back.

The story is mostly told from Margriet’s point of view, though there are a few scenes from her daughter and Claude’s viewpoints as well. Margriet is very feisty, willing to fight over a sou if she feels she’s owed it. Her daughter’s much kinder but has little agency, as her mother’s overprotective and often overbearing. Margriet supported the family by working as a wet nurse, which isn’t something that comes up often, though historically it was a common thing. It was also nice seeing a middle aged woman as the protagonist, especially one who is near-sighted in an age where glasses can only be afforded by the elite.

Claude was a great character. It’s awesome to see often overlooked people in history and, while misgendered through a good part of the story, the author always maintains his understanding of who he really is. Though they were short scenes, I really enjoyed the revelations regarding aspects of womanhood he’s missed (like breast binding) and how he survived in a soldier’s camp.

The author cleverly integrated her mythological aspects into actual history. At the end of the book she cites a Flemish painting that was her inspiration for the book, and it added an entire new layer to the story itself.

The writing can be a bit dry at times, in that it’s not a particularly fast paced or adventurous tale. There’s a lot of sitting around and talking or walking between cities.

If you like medieval history or want a historical fantasy that’s different from the norm, this is an interesting read.
Email ThisBlogThis!Share to TwitterShare to FacebookShare to Pinterest
Posted by Jessica Strider at 10:32