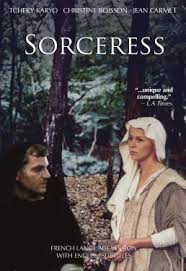 Etienne de Bourbon, a Dominican friar, visits a French village in search of heretics. While keeping an eye on the woman of the wood, who uses her knowledge of plants to save lives, he witnesses her performing a pagan seeming ritual to save a baby’s life.

The movie is based on the thirteenth century writings of the real Etienne de Bourbon, who witnessed such a rite and the story of a dog that was killed after saving the life of a knight’s son and which the local people turned into a saint and protector of children. (The real account adds more detail to the ritual and doesn’t necessarily agree with what happens at the very end of the film. You can read some of his writings, including this tale as item 370, here.)

The acting is quite good and he drama surrounding de Bourbon as he tries to see heresy in local superstitions and practices, becomes quite tense as he has the power of life and death for the villagers and their wise woman.

The film has excellent period sets and clothing and really gives a good view of peasant life. A side plot involves a conflict with the local count who’s sectioned off good farmland for a fish pond leaving his people with barren land for tilling.

There’s a minor amount of period nudity (nursing mother, naked child). The version I saw was in French with rather poor English subtitles (some things were left untranslated and some of the translations weren’t particularly accurate).

It’s a slow film with little action and it included the myth of jus primae noctis (that the lord has the right to sleep with a subordinate woman - on her wedding night or otherwise), which I could have done without. I was impressed that while rape was mentioned (twice) it wasn’t done in a gratuitous way.

I enjoyed this film and wish I’d heard of it earlier.

Email ThisBlogThis!Share to TwitterShare to FacebookShare to Pinterest
Posted by Jessica Strider at 09:59