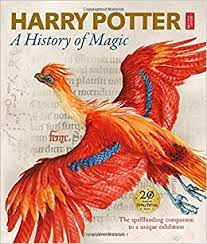 This is the adult companion guide to the British Library’s exhibit on Harry Potter (there's a shorter children's version of the guide that I did not look at).

After the introduction the book has nine chapters: The Journey, Potions and Alchemy, Herbology, Charms, Astronomy, Divination, Defence Against the Dark Arts, Care of Magical Creatures, and Past, Present, Future. Each chapter begins with a short introductory essay, followed by exhibit items in that category. There are a number of tidbits thrown in by the curators of the library’s collection. The final chapter is about J. K. Rowling’s work, showing some manuscript pages and edits she did on the books.

I found there was a lot of repeated information, especially with the first few chapters. The same quote or tidbit would be in the essay, mentioned again with the catalogue entry, then be in a text box elsewhere on the page.

Entries are accompanied by relevant quotes from the Harry Potter novels. A few chapters showed early manuscript pages or drawings by J. K. Rowland depicting the characters. There were also portrait paintings by Jim Kay and mini biographies for some of the Hogwarts professors teaching the classes that lend their names to the chapters.

Personally, I found the information provided lacking. It gives the barest overview of the subjects. If anything, it’s a very basic primer for the history of magic and a jumping off point for doing more in depth research elsewhere. A lot of great source material is mentioned, much of it free online, for those wishing to learn more specifics on many of the topics.

There’s no deeper discussion of why people believed in these things or how beliefs changed over time and distance. I guess I was hoping the book would go into more depth. Instead, it barely scratches the surface of what’s being covered.

As an exhibit guide it’s fantastic, showing a lot of colour photographs of the objects, often with multiple pages of manuscripts shown and comparison images. While the majority of information is Europe specific, I was impressed that some magical items from other cultures were mentioned (Ethiopian talisman scrolls, a Thai divination manual, a Japanese mythological creature, etc.).

On the whole, I wasn’t as impressed by this book as I’d hoped to be.
Email ThisBlogThis!Share to TwitterShare to FacebookShare to Pinterest
Posted by Jessica Strider at 10:30