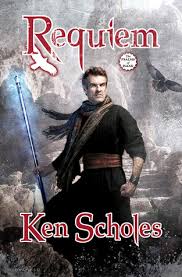 Picking up immediately where Antiphon finished, Requiem follows everyone as the Y’Zir forces conquer the Named Lands. Jin has taken her son to the Y’Zirite capital, Ahm’s Glory, and met the Empress she’s supposed to kill. Rudolfo has been given a position of authority within the Empire that he doesn’t want but can’t refuse. Vlad Li Tam searches for the Wizard’s spellbook to go with the staff he carries. A strange mechanical has emerged, sharing dreams with Charles the Arch-Engineer of Mechanical Science and giving Winters hope that the Final Dream of her people has not been lost. And Neb is on the moon, unsure of what to do.

There’s no reintroduction of people or events so be sure to brush up on the previous books before starting this one. Though the book does contain a glossary at the end if there’s a character, etc. you don’t recognize.

There are a lot of great turns in the book and we’re finally getting more answers than twists as prophecies reach fulfillment. There’s still a lot of political intrigue and quiet action, and several things that happen at the end of this book imply a great number of twists for the final volume.

This is a fantastic series that interweaves a great many plots and really keeps you guessing.
Email ThisBlogThis!Share to TwitterShare to FacebookShare to Pinterest
Posted by Jessica Strider at 11:22