Book Review: Into the Drowning Deep by Mira Grant 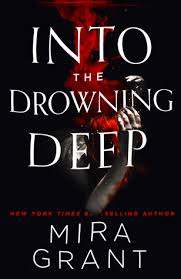 Seven years ago the entertainment company Imagine’s ship Atargatis was lost in the Mariana Trench. Video, called a hoax by most, showed mermaid like creatures attacking the ship. Now, a new ship is being sent to find out what really happened.

There’s a great diverse cast. It was interesting seeing the hearing impaired twins interact with and without their translator (though I was surprised more people didn’t consider handwriting or typing notes to communicate with them). I really liked Victoria, and seeing her determination to discover what happened to her sister on the Atargatis. The book had some great friend duos between Victoria and Luis and Olivia and Ray. It’s not common to see close and supportive male/female friendships so it was great seeing those. While I didn’t particularly like Dr. Toth, I loved her mixture of curiosity and fatalism when it came to the mermaids.

The mermaids, or sirens as Dr. Toth preferred to call them, were incredible. They’re both alien and based on deep ocean creatures, beautiful and terrifying. I was impressed that the author makes it clear how they became objects of myth while also being quite different from the stories they inspired. I loved the hypotheses regarding aspects of their biology, mannerisms, and communication. The creature building was brilliantly done.

I appreciated that the romantic elements came with a healthy dose of communication and a lack of manufactured drama. It came up quickly but felt organic to the story.

There were several conversations and minor issues that kept bumping me out of the story. This ruined my immersion and lessened the tension. For example, when scientists start boarding the ship Ray and Olivia point people out to each other. Ray sees Luis Martines and knows a surprising amount of information about his life and field of study. He’s even read one of Luis’ academic papers. While I’ll accept that Olivia and Ray were given a crew manifest, he definitely knows more than a cursory search would bring up, even if Martines’ wealth makes him an intriguing subject. But then he doesn’t know who Dr. Toth is, which makes no sense if he studied the crew, considering she’s more famous and important as a subject for their work.

Another scene with Olivia made me pause when she thought about her family: conservative father, liberal mother. Apparently her mother doesn’t think she should ever have sex due to her ‘condition’, which doesn’t seem ‘liberal’ to me. Had Olivia framed her thought explaining that her mother believed she was liberal but her words to Olivia proved otherwise, it would have made more sense.

I noticed several minor inconsistencies. I’m not sure if other readers will find these as distracting as I did, but I’ll discuss them in the spoiler section below. Thankfully the last hundred pages or so didn’t include any of these so I was able to really get into the action and feel the suspense and horror of the ending.

The book wasn’t perfect but it has some great creatures and the ending is excellent.

At the beginning of the book Victoria remembers her recent break-up, where her ex brought a box of her things to the cafe where they were meeting. While she walked out first, I had assumed that by bringing the box her ex signalled that things were over. But later in the book she thinks about the two reasons she dumped him, Luis comments that she was the one who broke things off, and the ex is shown bitter and vengeful about her leaving him.

A second instance happens with Blackwell. Early in the book he has a phone conversation with Golden, who is unhappy that Blackwell insists on going on the voyage personally. He’s so important Golden would prefer he send someone else. But we see a memo later where Golden tells Blackwell he’s sending him on the ship in part to prove his loyalty to Golden.
Email ThisBlogThis!Share to TwitterShare to FacebookShare to Pinterest
Posted by Jessica Strider at 08:59