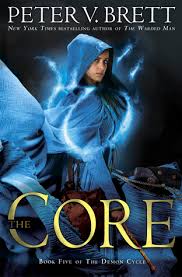 Cons: at a disadvantage if haven’t read the novellas

This is the fifth and final volume of the Demon Cycle. A lot has happened as Arlen and Jardir finally take their party down to the core. Their captured mind demon alerts them that the hive is close to swarm, but it’s too late for them to help their friends and loved ones who are about to be overrun at the new moon. All they can do as they journey below is hope they’ve prepared those they leave behind well enough to survive on their own.

There are a lot of point of view characters, some for the first time. This allows the reader to see events all over Thesa as the demons attack. And they attack hard. The book does a fantastic job of consolidating all of the people and places that have been visited in the series.

Having said that, I was surprised that the people and events of some of the novellas were referenced without preamble. Derek from Brayan’s Gold shows up with no introduction and I’m assuming the novella Messenger’s Legacy (which I haven’t read) explains why Ragen and Elissa aren’t in Miln when The Core begins. While I felt Briar was properly introduced in The Skull Throne, when Regan and Elissa showed up it felt like I’d missed a chapter, as there’s no explanation of what they’ve been doing though there are a few cryptic hints that they were in Laktown looking for Briar. Once they were back in Miln I found their political situation quite interesting.

There is a lot of action both with the defenders up top and those penetrating the deeps. The battles are varied, as the mind demons fight dirty. Once or twice we’re shown the after effects of a scene rather than a scene itself, which lessened the impact of some tragedies. But on the whole it’s a whirlwind of battles intercut with preparations for surviving the next battle.

I liked that Arlen and Jardir continue to develop as people. Seeing Jardir start to question his beliefs as he learns more about Kaji’s own descent while Arlen starts to realize there may in fact be a Creator after all, was kind of neat. I thought that the birth of Leesha’s child and the politics surrounding its identity were handled well.

There are a number of touching, heartfelt moments in the book. I particularly liked when Jardir says his goodbyes.

The final battle was hard fought and gave a very satisfying ending for the series.

Email ThisBlogThis!Share to TwitterShare to FacebookShare to Pinterest
Posted by Jessica Strider at 13:50