Book Review: Another by Yukito Ayatsuji 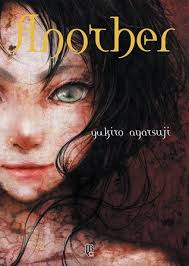 Fifteen year old Koichi Sakakibara moves in with his grandparents at the beginning of his third year of middle school. A collapsed lung keeps him from attending the first week of class and he finds things… odd when he does start school. Everyone seems tense and there’s a girl who sits at the back that no one seems to acknowledge is there. He slowly learns of the third-year Class 3 curse, a phenomenon that leaves members of Class 3 and their immediate family dead.

I loved the two main protagonists, Koichi Sakakibara and Mei Misaki (note, following Japanese custom most characters are called by their last names, so I’ll be doing that in my review). It was interesting seeing Sakakibara’s illness, his hesitation when joining the class, trying to figure out what was happening, his consideration of and compassion towards Misaki, his gratitude towards his grandparents. He’s a highly sympathetic character going through difficult times. Misaki is equally interesting, and quite different, being standoffish and mysterious. Seeing their friendship bloom was great.

The book has a very tense atmosphere. You’re just as in the dark about what’s going on as Sakakibara and it makes for an eerie first half of the book, wondering what’s up with Misaki, wondering what the curse is. When things start going wrong it’s quite terrifying. There are a number of twists to the story, making you question and re-question what’s happening.

The translation doesn’t clarify any social or cultural Japanese aspects of the book (aside from explicitly pointing out the meanings of the written characters (kanji) used for various people and place names. This doesn’t affect understanding of the story, though knowing some of this myself did add to my enjoyment of the book.

I did notice there was a fair amount of repetition with regards to conversations and plot points. The afterward to the paperback edition (printed at the back of the English edition) mentions that the book was originally serialized, which probably accounts for that.

There is some gore as several deaths are described. It’s a little graphic at times.

One thing that annoyed me was that the ending turned on a fact that the narrator (ie Sakakibara) knows, but you - the reader - do not. So it’s possible for him to figure out the final twist but much harder for you to do so.

On the whole, if you’re looking for a creepy read, this is a good choice.
Email ThisBlogThis!Share to TwitterShare to FacebookShare to Pinterest
Posted by Jessica Strider at 10:13