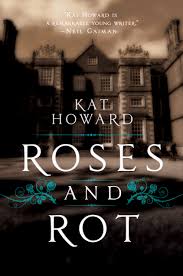 Imogen is a writer while her younger sister Marin is a ballet dancer. Their mother supported Marin’s beauty and talent, as they reflected positively on her. She denounced Imogen’s storytelling as lies, punishing her as necessary. Imogen escaped but had to leave her sister behind. They grew up. This is the fairytale of two sisters, coming together after a decade apart, to work on their arts in an artist’s colony where things aren’t as they appear.

I loved this book. It resonated with me on so many levels. Howard captures the hard work, the fear, the loneliness, the exhilaration of being an artist, believing in yourself one moment while wondering if you’re good enough the next. She also captures the emotional turmoil of a broken family: the guilt, the attempts to reconcile the truth you know from the truth others believe, protecting yourself from harm while constantly dreading the next attack - whether physical or verbal.

The book is so lyrically written, it’s prose is beautiful, and often heart-wrenching. The snippets of Imogen’s stories that retell her childhood are so sad and yet so hopeful as well. The descriptions are vivid and lush, easy to picture and viscerally present as events progress.

I loved the characters and the hints of what’s happening at Melete, the campus where they’re studying. Everything felt real. The characters impacted each others lives in ways it was hard to imagine when the novel started. Though I thought there were times when Imogen should have been more honest and open with her sister, I can understand why such intimacy was difficult for them, given their upbringing and past.

This is a brilliant book and I can’t recommend it enough.

I considered making this a con, but there was no way to mention it without spoilers and I’m not really sure it detracted from the book at all. I wondered, at the end, about the magic Gavin has, that saying something makes it true. He was afraid Marin would die, but she kind of points out - without really pointing it out - that had he (and by extension Imogen) believed in her surviving and succeeding in the fae realm, then his magic would have made that belief truth instead.
Email ThisBlogThis!Share to TwitterShare to FacebookShare to Pinterest
Posted by Jessica Strider at 14:05