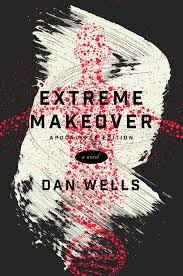 Lyle Fontanelle is the head chemist at NewYew. His newest experimental product is an anti-aging cream developed from research conducted on burn victims. But the most recent test group starts showing strange side effects, which show alternate potential uses for the cream. Uses that could destroy the world.

Each chapter header of the book mentions a time and a place and the number of days until the end of the world. This is a slow apocalypse. It’s a story of an experiment that goes wrong - much like Dr. Jeckyll’s experiment - which is then exploited by one person after another until there’s no going back.

The book questions aspects of corporate greed, personal identity, having a purpose in life, and more.

There’s a variety of characters, though most of the book is told through Lyle’s point of view. He’s coasting through life, socially awkward, not well liked, doing work he enjoys but isn’t entirely comfortable with how the company plans to use his new product. He goes through some actual growth as the story progresses, examining his previous actions and personality in the face of what his cream has done to the world. I was surprised by who he becomes by the end of the book. Susan, his intern, also goes through a series of changes, becoming someone completely different as well. Outside those two, character motivations predominately circle around greed and power in some form or another. As the stakes increase, so do their tactics.

Things progress in a realistic way given the premise. Each decision compounds the previous ones, making things ten times worse. It’s a train wreck that’s impossible to look away from - and a quick read as a result.

There’s a surprising undercurrent of humour considering it’s detailing the end of the world. It’s black humour, to be sure, but it had me laughing out loud at points.

This is a brilliant book if you like novels detailing soft apocalypses or plagues.
Email ThisBlogThis!Share to TwitterShare to FacebookShare to Pinterest
Posted by Jessica Strider at 17:18