Book Review: The Best of All Possible Worlds by Karen Lord 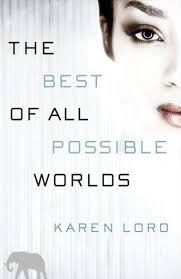 Four groups of humanoids developed on different worlds.  Many outcasts of those worlds found a home on Cygnus Beta.  When the Sadiri homeworld becomes inhabitable, killing most of the species with it, a group of the survivors head to Cygnus Beta, where they try to find genetically compatible mates from the various settlements.

I really liked all of the characters. Delarua, as predominant narrator, is a lot of fun, and her observations of the nigh emotionless Sidari and their hints of emotional expression are wonderful.  This is her story, and so her family shows up a time or two, an along with them, some person and psychological problems she faces.  Dllenahkh is also great, quite unique, and I enjoyed the ‘will they, won’t they’ aspect of their relationship.  I also liked that the supporting cast included a character who identified as gender-neutral.

Which is good, because while there is a plot, the book is really character driven.

The different cultures they encounter at the settlements were fascinating, especially the Seelie court.  The author did an excellent job of making each one sound unique in terms of government, customs, etc.

While I enjoyed the subtle - very subtle - romance, I didn’t feel particularly invested in the characters emotionally.  So for me the ending seemed to fizzle out.  The two main climactic style events didn’t come with a feeling of satisfaction when they were resolved, both because of that absence of emotional connection and because they were so drawn out that any tension was gone well before the resolutions.

It was a fun, fairly quick read, with some interesting aliens, and cultures, and characters.
Email ThisBlogThis!Share to TwitterShare to FacebookShare to Pinterest
Posted by Jessica Strider at 13:54