There are several videos and recipes for making Lego gummies.  I saw them and really wanted to make these. So I bought the supplies, including 3 moulds from ebay.

I didn't want my candies to be gummies though.  I wanted a cross between jello and gummies - solid enough so they wouldn't fall apart when picked up, but easy to chew.  So instead of using 1 package of flavoured gelatin + 2 packages of unflavoured gelatin, as most recipes state, I used a 1 to 1 ratio.  I

My results weren't perfect - I had some trouble getting them out of the moulds without losing corners and whatnot, so you may want to tweak this somewhat. 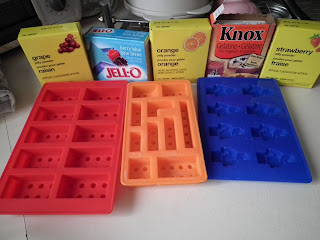 Instructions:
- mix the ingredients into a small pot.  It's important that the water be cold or it will clump.
- lightly grease the moulds so the candies come out easier (they'll stick if you don't grease them, but don't use too much oil or you'll have to wash the candies off)
- boil the liquid so the gelatin dissolves.
- pour the liquid into the moulds (I alternated using a small measuring cup and a squeeze bottle.  The bottle is more exact, getting into smaller places and avoiding spills, but you've got to let the liquid cool a bit before using it.  After a while I just used the measuring cup, as it was easy enough and required less effort/clean-up.)
- cool (you want them to harden properly, so don't rush this step. If you put them in the fridge they'll harden faster. I found that putting them in the freezer for 5-15 minutes at the end helped me remove them better from the moulds) 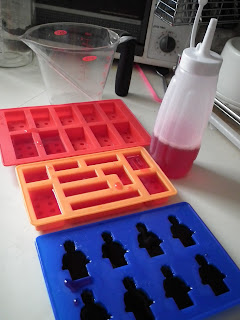 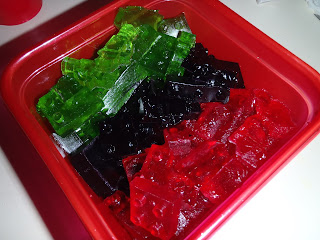 It's a time consuming activity, especially if you're doing multiple colours.  One batch of liquid perfectly filled my 3 moulds, but if you've only got one mould, factor in the extra remelting and cooling times.

One of the 'how to' videos mentioned getting cloudy candies and reboiling the liquid after letting it harden and cutting off the foam.  I didn't have any problems with foam, and while I did get a few bubbles, tap the moulds once they're filled and/or use a tooth pick to pop any bubbles.
Email ThisBlogThis!Share to TwitterShare to FacebookShare to Pinterest
Posted by Jessica Strider at 11:23