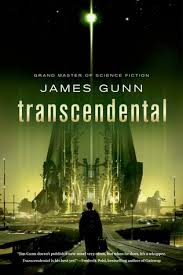 Cons: impersonal protagonist, telling rather than showing makes it hard to feel immersed in the story

Riley joins a mixed group of alien and human pilgrims chasing after hints that an alien machine has been discovered that helps entities transcend. But not everyone wants such a device found, for the galaxy is enjoying a hard won peace, a peace they believe this machine will upset.

I was told that this was a sort of Canterbury Tales told in space.  While Chaucer is referenced a time or two and some of the characters do tell stories, it’s not really a good comparison.  Chaucer’s tales are for enlightenment and entertainment.  Gunn’s tales are for exposition with regards to learning about character backgrounds and alien cultures.

Riley is an unreliable narrator.  Though you’re getting the story from his point of view, you’re unclear of his motivations.  You’re constantly warned not to trust anyone - including him, and told that everyone is lying about everything.  This makes it difficult to get to know any of the characters, or feel like you’re really connecting with them or with the story.

Similarly, when the characters do start telling about their pasts - lies though their tales might be - it’s through narration that feels more like info dumps than a character explaining why they’ve decided to make a pilgrimage.  Their stories are more about how their different races evolved or how they joined the Galactic Council than about their personal presence on the voyage.  I found some of the stories more interesting than others, though they were all unique.

The book’s pacing is excellent.  Each time I started to question things and need more information to maintain my interest, that information was provided.  I was surprised at how early the Prophet was revealed - I expected it to be revealed as part of the climax - but it was a revelation that ramped up the tension for the end of the book.

There are a number of mysteries that come up at different times in the book from assassination attempts to what the transcendental machine actually is.  Enough answers were provided that the ending felt satisfying.

It may not be the Canterbury Tales in space, but it does have some interesting elements to it and it was a quick, entertaining read.

The sequel, Transgalactic, is out now.
Email ThisBlogThis!Share to TwitterShare to FacebookShare to Pinterest
Posted by Jessica Strider at 10:29