Book Review: The Legions of Fire by David Drake 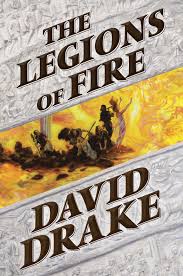 The magician Nemastes takes advantage of the superstitious senator Saxa and casts a spell in the man’s house.  That spell interrupts the poetry reading of Saxa’s son Gaius Varus, and turns the young man into an unwitting pawn of Nemastes’s enemies.  Also pulled into the spell’s influence are Varus’s sister, Alphena, who practices swordplay, even though it’s not a womanly art; his new, young stepmother, Hedia; and his best friend Publius Corylus, who grew up on the border of the barbarian frontiers of Germania.

The four players are pulled into other worlds, worlds in which creatures of myth are real, and where a group of evil men are planning the destruction of the world.

The author begins the book with a forward explaining that while the book is based on the history of ancient Rome (called Carce in the book to help keep the distinction), it is not historical fiction.  He also points out that all of the gods and mythological creatures he references are things people in the past believed in.

It was really cool reading a book that referenced a lot of old mythology as if it were real.  There were some expected creatures and a lot of unexpected ones as well.  And while the main setting is Carce, Egyptian, Norse, and other belief systems make appearances.

The four principle characters are well fleshed out, as are a few side characters.  I really enjoyed the developing relationship between Alphena and her close in age stepmother - the mix of anger Alphena feels towards the woman as well as her grudging respect.  Hedia meanwhile is a surprising woman: on her second marriage with few illusions about the world.  She enjoys sex and knows how to use her looks to advantage.  She’s also quite intelligent with regards to the danger posed by Nemastes and honestly wants what’s best for her new stepchildren.  I felt kind of sorry for Varus, who wants to do great things but just doesn’t have the necessary abilities.  I was impressed by his actions in the climax.  Corylus has a grab bag of skills that come in handy during the trials he faces.  He doesn’t grow as much as a character as the others, but he’s a fascinating character to read about.

The plot takes a while to get going, but the characters are so interesting I didn’t mind.  And when it does pick up, things go quickly.

A few word choices irritated me, specifically the use of ‘knight’ for a position in the Carcian army instead of the Roman title and ‘hell’ referencing to the Christian version of the afterlife (which didn’t exist as we think of it at the time) rather than the terms/meanings people back then would have used for the afterlife).   But those are pretty minor complaints and didn’t detract from my enjoyment of the book

This is the first of a four book series but though there’s a teaser for book 2 in the epilogue, all of the plot points are resolved and it can be read as a standalone novel.

If you like mythology and Roman fiction, give this a go.
Email ThisBlogThis!Share to TwitterShare to FacebookShare to Pinterest
Posted by Jessica Strider at 09:38