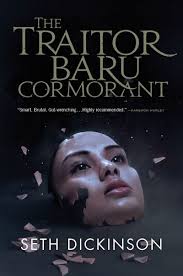 (Published in the UK as The Traitor)

Cons: not sure the rebel dukes gave their plans proper consideration

Daughter of a huntress, and a blacksmith, and a shield-bearer, Baru Cormorant grew up in Taranoke.  Her world changes when the Empire of Masks uses its trade agreement with Taranoke to slowly conquer the land, educating her and other native children in their schools.  Horrified by what has been done to her homeland but knowing that the Empire is too vast to fight, Baru resolves to destroy it from the inside.  But first she must prove her loyalty and worth to the Empire by using her intelligence to uncover revolt in another conquered land, Aurdwynn.

Before you start reading the book you’re greeted by a map.  After a quick cursory glance I turned the page.  Maps are common in fantasy books and this one wasn’t that detailed or complex.  But something had caught my eye so I turned back and examined the map in more detail.  It’s a map of Aurdwynn, showing the duchies and - more interestingly - Baru’s comments on the various dukes and what each duchy is known for.  There aren’t many comments, but the sheer honesty they portray is refreshing and drew me into the story before it had even begun.  Through the map we learn that the people of Oathsfire have awful beards, Radaszic is a complete moron, and Erebog is probably going to starve.  It’s a clever and fun map that peaked my interest. 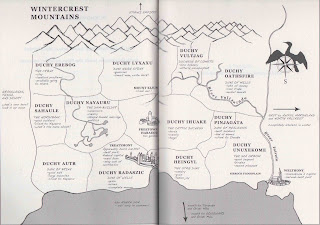 The novel starts with Baru’s childhood and education before heading to Aurdwynn where the rest of the book takes place.  This is a book driven by Baru’s character and her attempts to understand, control, and outmaneuver the dukes as she tries to organize the country’s finances while rooting out rebellion.  While there is some fighting, most of the book is concerned with political and economic intrigue.

Baru’s a wiz at economics and seeing the big picture of cause and effect.  Where she falters is in recognizing that individual people have the ability to cause change outside of the larger picture, meaning she sometimes gets blindsided by not taking individual passions and choices into consideration.  It’s a wonderfully tense book with a protagonist who’s always thinking so many moves ahead you’re struggling to understand her current plays.  At one point I had to reread a conversation to figure out what she’d read between the lines during it, in order to understand why she was doing certain things.  It’s a book that will keep you on your toes, second guessing her and everyone else’s motives.

I’ve never read a book that goes over, however briefly, the conquest of a country, so I really appreciated the point of view.  It’s both fascinating and horrifying, how - and how quickly - the Empire gained power in Taranoke.

After thinking about the book for a few days I find myself wondering how much the rebel dukes considered their plans.  They end up making at least once decision that seems to go against their individual interests.  A decision I’m not sure they’d be willing to make.  I’ll discuss it more in the spoiler section.

I’m not sure I agree with one aspect of the ending (more on that in the spoiler section too), but I really enjoyed the book.  I had to read it quickly, but I’d advise taking time to really think about what’s going on - to appreciate the decisions Baru makes and the circumstances she finds herself in.  It’s a fascinating read and I cannot wait to see what happens next.

I’m left wondering why the dukes, who are rebelling so they can return their country to their own power (as it was before the Empire showed up) would be willing to put one individual - and a foreigner at that - in complete control.  Considering the fact that even the Empire couldn’t remove their hereditary ducal positions, why would they want to do that themselves and install a ‘high king’ as it were, above them.  Isn’t that what they’ve already got with the Governor the Empire installed?  Their new system would give them even less power than they currently have - and no real gain except for not being under the Empire’s yoke anymore.  Even if they thought they could use Baru as a puppet figurehead (and if they believed that they weren’t paying close enough attention to her personality and actions), they were still willing to give up a lot of power simply by having such a position created in the first place, having their people rally towards someone other than themselves.  And yes, I understand the whole point was to have a central rallying cry for the rebellion (and picked someone who’d already ingratiated herself to the peasantry via her loans), but surely they could have the troops cry their own dukes’ names, since their army at the end wasn’t integrated.  Basically, I’m not sure that what the dukes were giving up is worth what they were getting, and some of the dukes were wise enough to be able to see that.

With regards to the ending, while I understand that the shadow government has an important - and fatal - secret to hold as blackmail on Baru, I don’t believe they’d allow her into their ranks without something even more powerful to hold over her.  In other words, I believe she failed their last test and they would have killed her as a potential liability (ie, she’s too powerful to let loose without a strong restraint, which they don’t have).  Without more leverage they can’t assure that she won’t work against them.  And while their secret is dangerous for her, I’m not sure it’s enough to keep her in line.  It also occurred to me that this final test was similar to the test the rebels put her to when they demanded she kill the ship captain after stealing the tax money.  Would the shadow government want actual sociopaths working for them?  People with no empathy or consideration at all for others?  Perhaps.  They are dealing in the bigger picture after all.  But it seems there should be a limit of just how cold your operatives can be before they’re more dangerous to the Empire than their worth compensates for.  Then again, considering who else is being courted by the shadow council, maybe sociopaths are what they’re looking for.
Email ThisBlogThis!Share to TwitterShare to FacebookShare to Pinterest
Posted by Jessica Strider at 11:04