Blast From the Past: Mrs. Frisby and the Rats of NIMH by Robert O’Brien 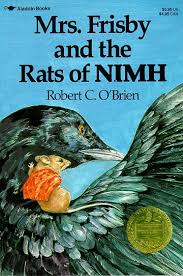 I always remember the book by the the title they used for the animated film that was based on the book, The Secret of NIMH.  Though I like the film it’s a hard sell for modern children, being fairly slow and low key.  The film also added an element of magic that the book didn’t have.

Mrs. Frisby is a young field mouse whose husband has recently died.  It’s getting close to the time when the farmer who owns the field she lives on will plough it, meaning she and her family need to move, and soon.  But one of her children is deathly ill, and the chill in the air will likely kill him if he’s moved.  It turns out, however, that her husband kept a secret from her.  He was once a prisoner of a place called NIMH along with some rats.  Those rats - and the knowledge they gained due to experiments that were performed on them - may know a way to save her son.

Mrs. Frisby is a woman (well, mouse) willing to risk her life for her children, and though she asks the rats for help, she has to do most of the dangerous stuff involved in making their plan work (both in the film and the book).  The most harrowing scenes involve an owl and a cat.

The rats are amazing, as is the home they’ve build for themselves under the ground.  For years after I read this as a child I wanted to name one of my kids Jeremy Nicodemus after two of the rats.

It’s a book that holds up well for adults (though I last read it years ago after I finished university).  I’m not generally a fan of talking animal books, but when done right…

There was a sequel, though I don’t remember much about it, having only read it once as a kid.

I just finished one of O'Brien's books that I didn't hear about as a kid (and probably wouldn't have liked then) Z for Zachariah.  I only heard of it because of the film that recently came out.  It's a YA novel about a young woman living alone in a valley after an apocalyptic event.  When someone arrives in the valley everything changes.  I'll be posting my review of it on Tuesday.  It's also a great read, short but compelling.
Email ThisBlogThis!Share to TwitterShare to FacebookShare to Pinterest
Posted by Jessica Strider at 11:07

Labels: Blast From the Past, Children's books, Fantasy, Mrs. Frisby and the Rats of NIMH, Robert O'Brien, The Secret of NIMH