Blast From the Past: The Perilous Gard by Elizabeth Marie Pope 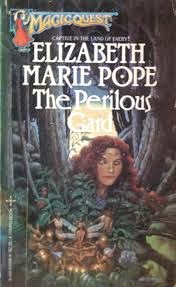 Kate Sutton is sent to live in a remote castle by Queen Mary, because her younger sister - who’s so beautiful she couldn’t have thought of these things herself - accused Mary of treating the Princess Elizabeth badly.  Kate, graceless, though intelligent, isn’t happy to be sent away from the princess she serves, especially due to her sister’s rudeness, but away she goes.  The Perilous Gard isn’t what she pictured, and when her guardian leaves, the mysteries of the castle, and the fairy folk who have sacred sites nearby, claim her attention.

This is a book that I luckily read during my ‘finish every book I start’ phase as a teen.  I say that because I found the opening of the book, Kate’s journey to the castle, extremely boring.  I didn’t really get interested the first time I read the book until Kate met the fairy folk, by which point I was quickly hooked by the action.

What really made me fall in love with the book though, was the romance that grows naturally between Kate and another character.  I’ve never been a fan of category romance novels because I find the contrivances that keep the characters apart irritating.  But I love good dialogue between men and women (or any hopeful romantic couple), especially when it’s humerous.  And this book had a LOT of great humour between the two.  By the time Kate realized she was in love, it seemed so natural that that was the case, given the circumstances of the novel, that I really wanted them to end up together.  The ending was so tense, with some unexpected twists, that I’ve read the book several times since.

I should also mention that I’ve never felt bored reading the beginning of the book since that first time.  I imagine part of this is due to my anticipation of what’s coming and part’s due to my appreciation of how cleverly the author works minor clues into the text, many of which I missed the first time I read it.

I loved her interpretation of the fairy folk and their traditions and how Kate matures as a person.  She’s a feisty woman who stands up for herself, even though that often lands her in trouble.

The book historical fantasy.  It takes place in the time just before Queen Elizabeth takes the throne, but has some potential fantasy elements added to it, depending on how you interpret things.  If you like Mary Robinette Kowal's books, you'll probably enjoy The Perilous Gard.  This is an older novel so it may be harder to find.
Email ThisBlogThis!Share to TwitterShare to FacebookShare to Pinterest
Posted by Jessica Strider at 09:30