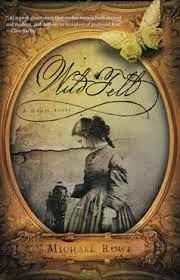 Jaime Browning tells a true ghost story by relating scenes from his childhood when he had a powerful ‘imaginary’ friend.  As an adult things come to a head when he buys an island with an old manor house called Wild Fell, where, unknown to him, several people have died in the past.

It took me a few pages to get used to the highly descriptive writing the author used - being more comfortable nowadays with the sparse prose that’s become popular.  But the book is incredibly immersive, making this character driven story fascinating and hard to put down.

The first scene is told from a young woman’s point of view, and Rowe does a phenomenal job with it.  Most of the book details common events of childhood: bullying, first love, etc., which makes the terrifying elements, when they appear, that much starker by comparison.  And some of the scenes are really scary.

I found the finale a little abrupt, but it’s a ghost story so you do expect a quick wrap up.  It’s a modern ghost story (as opposed to This House is Haunted, which is set in the 1800s), so it’s easier to relate to on a personal level.
Email ThisBlogThis!Share to TwitterShare to FacebookShare to Pinterest
Posted by Jessica Strider at 13:39