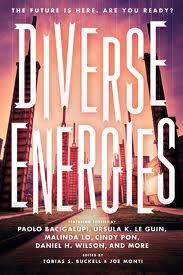 Cons: in several of the stories the characters are in lower class/servile roles to white people,

For Parents: no language, minimal violence, one story hints at sex but there are no descriptions, three of the stories have positive GLTBQ content

This is a great collection of stories.  Not only do they feature people of colour in lead roles, there are also several positive portrayals of gay/lesbian teens in worlds where their choices are normal and accepted by those around them as such.  Each of the dystopian worlds depicted is very different, with some ending with hope and others less optimistic.  I was a little disappointed that a few of the stories cast their coloured protagonists in subservient roles, as I expected this anthology to give a more hopeful viewpoint regarding race in the future (much as it does do for its GLTBQ characters).  But there's a lot to love about this collection, including the fact that a portion of the proceeds from the book are going to the Carl Brandon Society's Octavia E. Butler Memorial Scholarship Fund.  If you or your kids are into dystopian fiction, this is a must for your bookshelf.

***** "The Last Day" by Ellen Oh - It's the 15th year of the war between the East and the West and two 12 year old boys are working to help provide for their families in rural Japan.

This is a very powerful alternative history.  If you've read Black Rain by Masuji Ibuse or seen the Studio Gibli film Grave of the Fireflies (Hotaru no Haka), you'll know where this story is headed.

*** "Freshee's Frogurt" by Daniel H. Wilson - A frozen yogurt worker gives a police report about the domestic robot that malfunctions and attacks him and his co-worker.

It's not mentioned in the collection, but this story comes from Wilson's Robopocalypse.  I was unable to finish that novel due to inconsistencies between the frame stories and the narratives they're retelling.  For example, this story is told after the fact, as a police report, yet for some reason the narrator is using present tense language which, I'll admit gives the story more immediacy, even though it makes no sense.  At one point the narrator says, "Man, I hope he's out of it" after watching his co-worker get injured.  The problem is, this happened sometime in the recent past, and no longer applies to where the narrator (or his co-worker) is now.

The story itself is well written, if designed to be part of a larger narrative.

***** "The Uncertainty Principle" by K. Tempest Bradford - Iliana can tell when a change is coming, but she's the only one afterwards who recognizes that the world is different.

This story reminded me of Ursula K. Le Guin's The Lathe of Heaven.  The writing is great and the story interesting.  The protagonist is feisty and proactive.  The world-building is necessarily limited.  I'd love to see this fleshed out as a novel, detailing what's changed as Iliana becomes old enough to know the history, etc. from previous timelines.

**** "Pattern Recognition" by Ken Liu - David and the other boys and girls at the Volpe Ness School are taught that the Outside world is a horrible, desolate place.  Inside the compound, the kids work on pattern games during the day, even as he wonders more and more about the outside world.

This premise - of a school of kids kept separate from a post-apocalyptic world - has been explored in several teen novels (Eve by Anna Carey comes immediately to mind), but it's the ending of this story that makes it unique.

**** "Gods of the Dimming Night" by Greg van Eekhout - It's the third winter without a summer in San Diego, and 17 year old Edward is out begging for work to help his family survive when he sees the flyer for a NorseCODE medical study that pays well.

Interesting use of Norse mythology.  I liked the author's definition of heroism at the end.

*** "Next Door" by Rahul Kanakia - Aakash's family squats in the garage of a family of strangers.  But unlike most of the strangers who wear implants, this father and son are aware of the hoards of street people around them.  When Aakash and his boyfriend see the son of his stranger family trying to break into the conservatory, they wonder if their dream of having their own pest free place to squat is finally within reach.

A very unique dystopian world, with gross overcrowding and a huge bedbug problem.  Definitely not a world I'd want to live in.  The story's a little bittersweet with an open ending.

*** "Good Girl" by Malinda Lo - Kyle looks pureborn despite her mixed blood, allowing her to live above ground.  She meets Nix in a basement leading to the tunnels to ask if her brother, who disappeared the previous year, lives there now, and finds something unexpected.

Another bittersweet story about forbidden love and survival in dangerous circumstances.  Well written but the ending's a little depressing.

*** "A Pocket Full of Dharma" by Paolo Bacigalupi - Wang Jun is a beggar boy in old Chengdu.  When he's witness to a murder, he ends up with an object that men will kill - and die - for.

Kind of long, the story moves around a lot, with Wang meeting up with various people, trying to figure out what to do with the object.  Very little is told about the interesting living architecture that is slowly growing over the city into luxury housing or the plague that crippled the boy.  Still, it has its moments.

*** "Blue Skies" by Cindy Pon - The unnamed narrator kidnaps a you girl for ransom.  You, the haves, live in helmeted suits, with purified oxygen, water and food.  This provides them longer lifespans than the rest of the human race.

The story ends a bit abruptly, but I found the characters very interesting and the have/want conflict familiar, if taken to extremes.

**** "What Arms to Hold Us" by Rajan Khanna - Ravi drives a golly, a mechanical mining machine controlled via a crown powered by the mineral they're digging, primosite.  But Ravi dreams of someday moving on from the mines, like his older brother.

Minimal world building doesn't detract from the emotional punch of this story or the hopeful ending.

**** "Solitude" by Ursula K. Le Guin - Serenity's mother is a scientist who, when the inhabitants of Eleven-Soro prove to be enigmas to the previous Observers, decides to use her children as a means of learning how the society works.  Growing up as one of the natives, Serenity has more of a connection to her new home than her mother's people.

This is a great story about learning from other cultures and accepting that one people's way of seeing the world isn't every people's way of doing so.  It's a longer story and while it covers a lot of time, it's interesting for its characters and world building.
Email ThisBlogThis!Share to TwitterShare to FacebookShare to Pinterest
Posted by Jessica Strider at 14:59