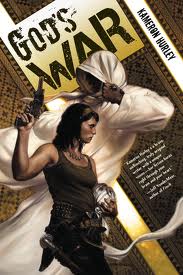 Nyx used to be a Bel Dame, a government sponsored assassin sent after deserters from the war with Chenja.  But after a bad job she's stripped of her membership and left doing dirty mercenery work.  Her team consists of misfits escaping one thing or another: a Ras Tiegan communications man, a Mhorian shape shifter, a gun loving local (poached from a former boss) and a Chenjan draft dodger, whose magical abilities of controlling bugs are limited.  When they're offered a well paying - but dangerous job, Nyx takes it, not realizing it would pit her against the toughest, most dangerous women in Nasheen.

Described by the author as being a book about "Bugs.  Blood.  Brutal women." and "bugpunk at it's best" this was a... unique read.  Heavily influenced by middle eastern culture, the book takes place on a planet colonized by several groups of people, all followers of the book.  Each group interprets the book differently though, which has led to a centuries long war among the Nasheenians and the Chenjans.  The politics, both between the nations and within Nasheen (where most of the book takes place) are fascinating.

The characters themselves are interesting, each having their own reasons why they've left their homelands to live in Nasheen, and why they're working for Nyx.  There's a good balance between action and development, so you get the chance to really know what motivates each of her team members.

I would have appreciated more description and deeper world building.  I had to look up what a burnous was (a long cloak with a hood that everyone in the book wears) as there was no proper description of it (I got that it was worn over clothing and had a hood and pockets, but didn't know it was a cloak rather than a jacket).  Neither bug magic nor bug tech are explained at all, nor how this planet develped them.  The same goes for shape shifters, who you learn were created, but not why or how (though this didn't play into the novel as much as the bug magic and tech so I can understand why the author wouldn't want to focus on it).

I also found the opening a bit slow.  Not in terms of action (there's a LOT of action), but in terms of plot.  The opening scenes set up things for later, but you don't realize that until you're several chapters into the book.

There's a lot of violence, and a fair amount of gore (several people are tortured and replacing body parts is one of a magician's talents, which gets used a lot in this book).

If you're looking for something very different from what's out there and like kick-ass women, you've found it.  If you've got a weak stomach, look elsewhere.
Email ThisBlogThis!Share to TwitterShare to FacebookShare to Pinterest
Posted by Jessica Strider at 12:04

So, are you going to go on to Infidel, Jessica? :)

I haven't decided yet. This book was so brutal I need a break from the world. I have trouble reading series (as it's a big time commitment, and there's that pile of books by other authors waiting for me...).


I'm not sure if one of the characters I liked returns in Infidel, which would also affect whether I want to read the rest of the series.

There's a lot to like here though. And it was definitely different. I was thinking of using Hurley as a new author spotlight candidate, but I have no clue what to compare her books to.

Hmm, if you want to email me, I can tell you if that character comes back (I've read both)