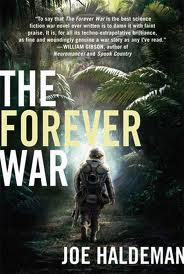 Reviewer's Note: This review is of the author's preferred edition of Forever War, published in 1997.

Forever War follows the military career of draftee William Mandella after aliens attack an Earth space ship outside a collapsar jump.  Collapsar's allow long range space travel, and Earth refuses to give up the use of them.  The best minds, both male and female, are drafted to fight this exhorbantly expensive war the rest of Earth must pay for.  But as the years pass on Earth due to special relativity, and only months pass for the soldiers who survive combat, Mandella starts to wonder if he'll recognize home when his tour is over.

Forever War does for Vietnam in science fictional terms what Alexander Solzhenitsyn's One Day in the Life of Ivan Denisovich did for the Russian gulag: allow regular people to experience it.  Mandella's career is exceptional, as the author uses him to explore all aspects of the war, from training on earth and Charon, to witnessing combat, returning home and realizing he no longer belongs, reinlisting, getting medical treatment, becoming an officer, and more.  Through his eyes we experience fear, love, PTSD (in minor ways) and more.

The novel packs an emotional punch and covers an amazing amount of information, given it's size.  Haldeman's prose is clear and concise, a pleasure to read.

As the war progresses over the centuries, Haldeman occasionally explains how the Earth has changed to face the circumstances.  The most detailed of these passages comes when Mandella's first tour ends, 2 and 27 years after he enlisted.  Earth is a cross between Harry Harrison's Make Room, Make Room and the later part of Octavia Butler's Parable of the Sower.  In other words, Earth is overcrowded and violent.  His exploration into sexuality as it pertains to population control is interesting, espcially considering the current controversies over gay marriage.  For a book that's 38 years old, it's surprisingly relevant.

This is a hard SF story, meaning the planetery battles are short while the battles in space are long and drawn out with very little action.  Mandella's a physicist, so most of the info dumps are via conversations he has with others, where he either explains the scientific concept, or has new concepts discovered while he was on a mission explained to him.  Like the rest of the writing, these passages are short, to the point and integrated properly into the story.  This reviewer has limited physics knowledge and had no problem following the novel, even though most of the science went over her head.

The only 'complaint' with the book is that it's dated.  Meaning, the aliens attack in 1996, which obviously didn't happen.  This is very easy to overlook and shouldn't detract from anyone's enjoyment of the book.  There's some talk of hippies, but none of the sexism the word 'dated' tends to imply when it comes to older science fiction stories.  In fact, this is a remarkably feminist work, with women and men treated equally in the army (though more men then women end up in positions of command as far as Mandella's experience is concerned).

If you haven't read this yet, you should.  And if you're hesitant to read hard SF, this is a good introduction to the subgenre.
Email ThisBlogThis!Share to TwitterShare to FacebookShare to Pinterest
Posted by Jessica Strider at 09:00