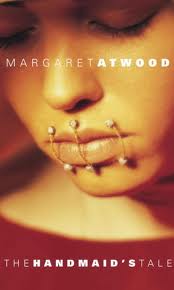 Cons: some readers may find the constant shifts in time confusing, little action

Offred is handmaid to a commander in the Republic of Gilead.  Her duty is to bear him and his wife a child, as per the Biblical order of replenishing the Earth as applied by Rachel in the book of Genesis.  She once lived in the State of Massachusetts, when the Republic was part of the United States of America.  Back then she got an education and loved a man.  She had a child.

When the Republic took over, her marriage was declared void and her child taken.  She was reeducated.  Now it is a crime for her to read.  It is a crime to do many things.

This is her story.

This is a book that is best read by those with life experience.  Had I read this book 5 years ago I wouldn't have had the same profound revelations from it.  Ten years ago and I probably would have hated it.  In the past few years I have left the church of my upbringing, allowing me to see from an outsider's perspective how religions can manipulate their members.  I also got married and have learned more about the expectations placed on women and how little those expectations take into account women's desires.

I read The Handmaid's Tale at this time of my life - the right time - and loved it.

Published in 1985, the book tells of a religious coup in the US, creating a nation that follows a Christian style, Bible based, Sharia style law.  If you think this would be a good thing you haven't read the Bible.  Homosexuality is out.  Interracial marriage is out.  Divorce is out.  Abortion is out.  Slavery however, is in.  As is corporal punishment for things like adultery.  As is polygamy.  And incest (when it come to in-laws, cousins, etc.  The Catholic church outlawed many things the Old Testament considered ok with regards to consanguinity).  And prostitution, while not encouraged, was also not prohibited or prosecuted (see the story of Judah and his daughter-in-law, the woman is almost stoned as an adulteress until she proves her out-of-wedlock child is the product of her father-in-law by prostitution.  In the end neither one of them is punished for the prostitution side of things and one of the woman's children becomes the ancestor of King David).  This is particularly pertinent as politics in the US seems to be moving towards it becoming a more Biblical/Christian country without taking into consideration the negative aspects of such a society.

The new government in the book takes over very quickly by doing two things - removing government officials and taking their place and removing power and money from women.  Like the NAZI regime, it ruled by fear.  No one protested much because those who did in the book were shot.  Fear is a powerful motivator, and when you can't trust anyone around to not turn you in for something you do or say there's little to do but fall into line.

And yet the book holds out a modicum of hope.  There are always those willing to fight the system, creating an underground railway to help women (and others) escape and trying to undermine the government from within.

The book is narrated by Offred, who alternates between telling her life as it is, at the home of the commander whose child she is to bear, to scenes from her childhood and her feminist mother, scenes with a feminist friend in university and scenes from her marriage.  Some readers may find the constant jumping from one narrative to the next confusing though I thought Atwood did a fantastic job of making this highly literary book accessible to all readers.  She uses other literary techniques and does a lot of word play (specifically showing the different uses for the same word) but it read easily.  The writing flowed well.

It takes a while for Offred to explain how the world changed, but the journey - in all its periods - is fascination.  And when you learn how the coup was performed,  it's scary in its simplicity.  The lack of uprising against the new regime reminded me of the reasoning behind how the government controlled people in the dystipian novel Battle Royale.  It also felt like a toned down version (in terms of showing brutality not because the book is a 'light read' by any stretch) of the much more recent rewrite of The Scarlet Letter, When She Woke by Hilary Jordan.

Intensely thought provoking, if you have any interest in dystopian fiction or plausible ways the world could fall, read this book.
Email ThisBlogThis!Share to TwitterShare to FacebookShare to Pinterest
Posted by Jessica Strider at 12:03