> What is Archon about?

ARCHON is the first novel of a gothic fantasy trilogy called The Books of Raziel.  The story is written in the style of a thriller, and centers around the character of Angela Mathers, a red-haired girl with a tragic past.  In the world of ARCHON people with red-hair--derogatorily termed 'blood heads'--are suspected of being a possible dark messiah.  Luz, an island city owned by the Vatican, has become a haven for 'blood heads' like Angela, but shortly after her arrival at the city's prestigious West Wood Academy, Angela instantly becomes embroiled in dangerous intrigues that simmer below the surface.  Angela is far from a typical 'blood head.'  She has had visions of angels, and these visions are so realistic and believable that she has done unthinkable things to try and enter heaven prematurely.  Her unusual talent in painting these angels attracts the notice of a young priest at West Wood.  Unfortunately, his girlfriend is a powerful witch, and not only does Angela arouse her jealousy, but also her wrath.  As Angela must fight for her life, she also learns about who the Archon might be, the otherwordly powers fighting for the Archon's attention, and just what it might mean if the prophecy of darkness is ultimately fulfilled.
> What drew you to writing about angels?

I always wanted to write a story that was more about angels and demons as they are truly portrayed in history and religion: powerful, otherwordly beings, that are in very many ways both similar to humans and utterly beyond us.  It was that mix of beauty and ambiguous morality that attracted me.  Many people do not think of angels as aliens, but in their strictest definition, they very much are.
> What's special / different about your angels?

My angels are sexy, seductive, creepy and terrifying all at the same time.  'Terrible beauty' is what immediately comes to mind.  The Books of Raziel really shows just how awesomely dangerous the supernatural can be.  Yet at the same time, these angels can be very human.  Their morality is not ours, but they can be so human--damaged, emotional, with a very mortal kind of love as the driving force behind their most sublime or terrible actions.
> What made you want to be a writer?

I wanted to be a writer merely so I could share the visions of the worlds I create.  For me, that's what it's all about. 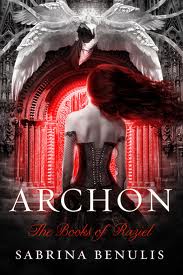 > Who is you favourite character in the book and why?

My favorite character in the novel is probably Troy.  Sadly, she does not have a ton of 'screen time' in ARCHON, but her role expands very much in the following books.  Troy is a character who comes off as typical demon--at first.  Eventually, her most fascinating aspect is that she is in reality quite noble.  A hunter, she can be cruel by human standards, but she is a creature molded by survival, and really just epitomizes the natural need for animals like lions and tigers.  Lions seem cruel when they hunt gazelles, but they are merely doing what they were born to do.  Unfortunately, in ARCHON Troy suffers from another character painting her as a villain, though he certainly has an understandable reason!
> If you could, would you change places with any of your characters?

Well, whoever the Archon turns out to be--they hold a lot of power.  They also get a pretty nifty weapon.
> How long did it take to write Archon?

I first developed the idea for this story six years ago, shortly before I graduated college.  I knew it would be the kind of thing that would take a while to develop, and frankly, it's still being developed.  Real stories are always evolving.
> What was the hardest scene for you to write?

The hardest scene for me to write in ARCHON was the opening chapter.  The tone had to be absolutely perfect, which was very difficult.
> Do you feel the Masters degree you got in Writing Popular Fiction prepared you for novel writing and the publishing world?

My Master's classes and the program at Seton Hill University were great when it came to craft and an introduction to the publishing world.  Published authors help you out as mentors, the critique groups are great, and they always had guest authors, editors, and agents come to talk to you frankly about the business of writing.  However, there is nothing that can compare to personal experience.  My journey to this stage in my career could be a class in and of itself.  Expect the unexpected is now my motto.
> When and where do you write?

I usually write best at night, and I do so in my little spare bedroom that works as my personal office.  I need some measure of quiet, and to be wearing something comfortable--usually a robe.
> What’s the best/worst thing about writing?

The best thing about writing is when other people love your stories just as much as you do.  The worst thing is when they don't.  Learning to handle both reactions will put you on an emotional rollercoaster until you get used to the constant up and downs. 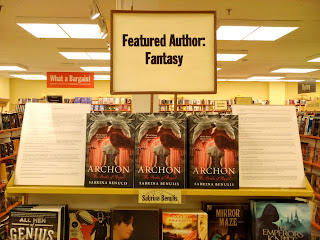 I hate to say this, but I had no clue how much the publishing industry had stagnated.  There are very few debut novels that are not clones of another popular book.  This situation in the fantasy genre is particularly deplorable, as it almost punishes people with honest imagination.  Strangely enough, this is a phenomenon particular to the Western reading world.  In Japan, for instance, there are so many debut novels of so many varieties published every year, it boggles the mind.
> Do you have any advice for hopeful authors?

My advice for any hopeful author is not to give up.  Ever.  Talent is great, but persistence in this industry means everything.  Also, don't let any rejection get you down.  Some of the greatest literary talents in history were told that they were hacks.
> Any tips against writers block?

Writers block is overcome by one thing alone: writing.  Just do it, even if it seems like complete crap on your screen.  You can always go back and fix things.  That's the glory of a first draft.
> How do you discipline yourself to write?

It can be hard to write when writing becomes a job or a chore.  The best way to discipline yourself is to always be excited about what you're doing.  If you are lucky enough to have a reading audience, forget about them when you sit down to write.  Pretend you are writing just for yourself, and your imagination will soar and you will look forward to working on your novel.  I think a lot of procrastination comes from performance anxiety.
> How many rejection letters did you get for your first novel or story?

I got a typical number of rejections for a debut author, but that was partly because I originally sent to agents what--now a trilogy--was originally one big book!  But my book was very unique too, and for me it had a lot to do with finding an agent and editor that understood my vision, and what I was trying to do in the world of gothic novels.
Email ThisBlogThis!Share to TwitterShare to FacebookShare to Pinterest
Posted by Jessica Strider at 12:48