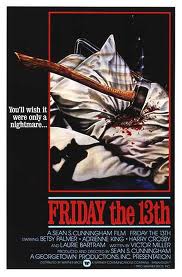 Twenty years after closing down due to unsolved murders, Camp Crystal Lake is being readied for reopening.  On Friday the 13th, the six councillors and new owner are stalked by a killer.

The movie has more suspense than gore, which I appreciated.  But like all slasher flicks, don't expect much of a plot.  The reveal would have been surprising had someone not told me who the killer was earlier this year.  The film does a good job of showing the killer's POV without giving away any clues about who it is.

Harry Manfredini's score reminded me of psycho - lots of discordant 'slashing' notes.  There was also an upbeat undercurrent at times that deflected some of the horror.

There was so overacting, especially Adirenne King's portrayal of Alice Hardy.  Her character ticked me off towards the end of the movie.  She seemed bizarrely clueless when facing the killer, moreso than the other victims.  The inclusion of Kevin Bacon made up for that though.  :)

Email ThisBlogThis!Share to TwitterShare to FacebookShare to Pinterest
Posted by Jessica Strider at 09:17