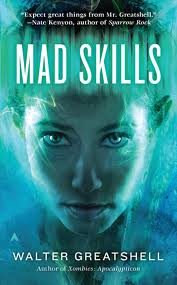 Cons: occasionally the protagonist would learn important things offstage that would have been better learned within scenes of the book, climax felt like a rushed information dump, Maddy is surprisingly unconcerned about the consequences of her actions with regards to others

Maddy Grant and her potential step-brother are in an accident at a fair.  Ben dies, but Maddy is left severely brain damaged.  Luckily for her, her parents contact the Braintree institute, which is experimenting with the use of computer implants.

With the implant, Maddy's as good as new.  Better even.  She knows things - things she didn't know before, things she doesn't want to know now.  Like how to make a rocket out of convenience store items.  Like how to kill a man.

Her heightened intelligence causes Maddy to question things that most people ignore, don't question or take for granted.  Where does fast food come from?  Why do people live in suburbs and commute to cities to work when it takes so much time to get back and forth?  Why do we adhere to gender mores that demean and cripple (dieting, high heeled shoes, genital mutilation)?  Mr. Greatshell avoids too much social commentary by mentioning these points for discussion from readers but not dwelling on them in the book.

I don't know how accurate the scientific technobabble was, but it sounded convincing and wasn't overwhelming in quantity or detail.

And when Maddy starts to learn what's really been done to her...  Well, it's a fascinating story.  It's also a surprisingly quick read for all the thought provoking points and scientific experimentation.

At least once in the novel, she learns something off page that confused me when it was mentioned, as there was no hint of it elsewhere in the story.  And the 'reveal' finale was quite an info dump, requiring a few chapters to explain.  I'd have liked a slower climax to match the pacing of the rest of the novel.  I liked the nod to the Firemen of Fahrenheit 451 and the (perhaps unintentional) one of indentured slavery a la Parable of the Sower.

If you like hard SF set in the modern day, I highly recommend this.
Email ThisBlogThis!Share to TwitterShare to FacebookShare to Pinterest
Posted by Jessica Strider at 13:51