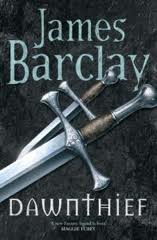 Cons: minor inconsistencies in characters and events add up and bump you out of the story

While doing a routine mercenary job, the Raven loses a member and follows an enemy Xetesk mage into another dimension.  After these experiences the remaining members of the Raven realize two things: they're getting old and the world is a stranger place than they thought.

The mage, Denser, later hires them for an extremely important and dangerous mission, to find a spell that can defeat the newly escaped Wytch Lords, mages that almost destroyed the world in the past and are more powerful than the combined might of the 4 mage colleges put together.

Meanwhile, a Dordovan research mage, Erienne, and her children are kidnapped and pumped for information about the same spell Denser is looking for: Dawnthief.  It is a spell that can destroy the world in the wrong hands.

This is a book with a lot of action.  It's brutal and realistic, much of the tension due to Barclay's willingness to kill off members of his team - starting with all the characters I liked.

It's an old style fantasy quest, with a decent amount of character development and an interesting magic system.  The politics between the mage colleges and that for the Korina Trade Alliance are interesting too, fleshing out the world.

Reading Dawnthief I noticed a lot of minor inconsistencies, characters acting bizarrely given recent circumstances - nothing major, and quite possibly nothing others would notice (reviewing makes you EXTREMELY picky about details).  If it only happened a few times it wouldn't have bothered me, but they popped up enough that they periodically pushed me out of the story.  Things like a shape changed wolf picking up an object in its mouth and then attacking someone by biting the person's throat (what happened to the object?  Is it under the wolf's tongue?  Did the wolf swallow it or drop it?) and wondering where 'the Barbarian' was from, and what made him a barbarian with regards to the other characters.  As I said, they were generally nit picky things that most people wouldn't notice but which made this book a fairly slow read for me.

If you like the idea of Joe Abercrombie's First Law trilogy mating with Terry Brooks' Sword of Shannara, this is the book for you.
Email ThisBlogThis!Share to TwitterShare to FacebookShare to Pinterest
Posted by Jessica Strider at 11:18

I was looking forward to this for a long time. It's been in my To Read pile for years and I just picked it up for my Kindle last week. I'm about 1/4 of the way through and debating putting it away. I was hoping for another Black Company but it's just not living up to that yet....