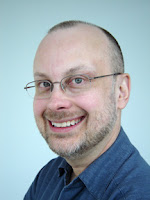 WAKE is about the World Wide Web gaining consciousness. It's the story of a 15-year-old blind girl in Waterloo, Ontario, who gets a post-retinal implant that's supposed to give her vision but instead lets her see the structure of the Web -- and she discovers an entity hidden in the Web's background. She tries to connect with it, bringing it into contact with the outside world.

> What are your favourite three books (not by you, either in the field or out of it)?

TO KILL A MOCKINGBIRD by Harper Lee
GATEWAY by Frederik Pohl
THE FOUNTAINS OF PARADISE by Arthur C. Clarke

>In the books you've written, who is you favourite character and why?

I think Caitlin, the blind girl in WAKE, is my favourite -- which is surprising, because she's so unlike me in many ways. But she's so smart, so feisty, so committed to her principles, and so curious about the world, that she's enormous fun to write; I particularly enjoyed writing her blog postings that appear in the novel.

The truth is, authors tend to make life pretty miserable for their characters: we put them through hell, even though we may like them a great deal. I think I prefer living in the random real world, rather than in a fictional world in which an author is always thinking of new ways to mess things up for me!

The world of WAKE is subtly different from our own. It's the very near future, but it is a future of basically good people. It's that future we're hoping we're all going to get as we come out of the current economic crisis, as the United States renews itself, and as Canada becomes a happier place. I'm not writing about a far-future utopia, but the kind of world we could have if we all tried a little harder to work together -- and yes, I'd very much like to live in that world.

The first novel I wrote was END OF AN ERA. I outlined it in 1980, when I was 20, but didn't really dive into working on it until about seven years later. It took me a couple of years of part-time work -- and it did eventually sell: it came out as my fifth novel, in 1994 -- and is still in print.

I've written lots of gut-wrenching scenes over the years, and some of those have been very difficult to write emotionally, but the hardest scenes I've ever had to write creatively are in WAKE: much of the novel is told from a first person point of view by the consciousness that is waking up in the background of the World Wide Web. Making those scenes plausible and captivating was very difficult to do. I ended up using a lot of interesting linguistic tricks to pull it off, and I was delighted when my brother-in-law, David Livingstone Clink, who is a very accomplished poet, said that they read like poetry.

> What was the most fun book signing, convention, etc., you've attended and why?

> If you still have one, what's your day job? If you don't, how long did it take before you could support yourself only on your writing?

I've been a full-time freelance writer for 26 years now, since 1983, and a full-time science-fiction writer for 17 years or so (my early career was mostly writing about business and high technology). It took about three years before I was making a decent living doing the nonfiction work in the 1980s, and, when I switched to mostly fiction writing, it took about five years for that to really take off. In 1996, I won the Science Fiction and Fantasy Writers of America's Nebula Award for Best Novel of the Year, and that was the turning point: shortly after that, my wife quit her job and came to work full-time for me as my salaried assistant.

Radio and Television Arts from Ryerson, class of 1982 -- I was in the same class as DAW fantasy author Tanya Huff, and we've been great friends ever since; in fact, we collaborated on our final big TV project together.

It's easier to write fantasy, because you can make up the rules for your universe, and you can have magical things happen, or not, at your authorial whim. In science fiction, you've got to adhere to the rules of our universe -- and, since our universe is governed by quantum mechanics and relativity and all sorts of other complex things, it really does require a lot of work to do it properly.

I have a La-Z-Boy recliner in my living room, opposite the fire place, with two monitors hooked up to my computer, and I spend four or five hours every day sitting there, tip-tapping away on a cordless keyboard.

The best thing is when somebody tells you that you changed their life. I just autographed a book today for someone who is now studying neuroscience at U of T because he was inspired by my book MINDSCAN. The worst thing is the uncertainty: there is no job security for writers, and you're only as good as your last book. It's a risky profession.

That editors really do very little editing. Most of their job is meeting with the art department, the sales force, and so on; the romantic ideal of an editor spending months helping you craft a manuscript just isn't the way it works -- you've got to get it 95% of the way on your own; editors just don't have time to deal with authors who can't do most of the work themselves.

Write. Write. And write some more. Don't talk about it. Don't daydream about it. Don't wait for the muse to strike. Do it now -- right now -- and do it often. The only way to become a good writer is by producing a lot of material.

END OF AN ERA was rejected three times before it found a publisher. Rejection slips are a fact of life; every writer I know has them. But they're badges of honor -- they mean you went to war, and lived to tell the tale. Be proud of them.
Email ThisBlogThis!Share to TwitterShare to FacebookShare to Pinterest
Posted by Jessica Strider at 09:17