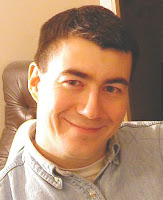 >Only three? They change all the time. Right now - Shakespeare's Macbeth, because it's really the greatest tragedy, HG Wells' War of the Worlds, which I think is the best science fiction ever written and fantastically prescient in so many wars, and Gone with the Wind, which is simply classic.

What was the first novel (published or unpublished) that you wrote and how long did it to write it?

>My first novel was Mission Critical, put out by Prima Publishing when they were trying to establish their Proteus line. I wrote most of it in six weeks flat because it had to be co-ordinated with the release of the game of the same name. There's nothing like a deadline to accellerate the pace of development!

>Very much the opening scene of Genesis. It's intense and there's nothing pretty about it. I very much wanted to soften it, but it needed to be the way it is so the rest of the book, and the rest of the trilogy, will make sense. It's saving grace is that it ends with hope, which is a theme throughout the narrative, but the reader certainly earns it - and I did too.

>I'm an infantry officer in the army reserve - not exactly a day job, but one I love.

>I don't think one is necessarily harder than the other. In both cases you have to create a world, and know the rules of that world and follow them. They are certainly different stylistically. I like hard science fiction because I'm very familiar with the rules of math and physics, but the most important elements of a story are always plot and character, and that's true regardless of the genre.

>I lead a very active life and have written anywhere and everywhere - I biked across France with my laptop and wrote in all the little cafes across the country, I've written during downtime on military exercises, on trains and planes and ships, public libraries with open access computers, the homes of friends and relatives. Wherever you happen to find me, you'll find me writing.

>The best thing about writing is certainly connecting with fans, people who really enjoy what you've done. The worst part is certainly staring at that blank screen, trying to turn the beautiful images in my mind into words that do them some kind of justice.

What is something you didn't know about the publishing industry before you had your fist book published?

>I didn't realize how very slow the process is, even when everything goes right. It can be maddening. It takes ten years to become an overnight success.

>Believe in yourself, believe in what you have to say, and write every single day.

>The only way to be a writer is to sit down every day and write. If you don't know where your story is going, write something else. Write something you're sure you're going to junk, but write something. It keeps the gears going around, it keeps the story in the front of your mind, where it needs to be. Those glorious days where the pages flow effortlessly are founded on all those days of hard and seemingly fruitless work.

>I was tremendously fortunate and sold my very first story to Larry Niven on the very first submission.
Email ThisBlogThis!Share to TwitterShare to FacebookShare to Pinterest
Posted by Jessica Strider at 12:36